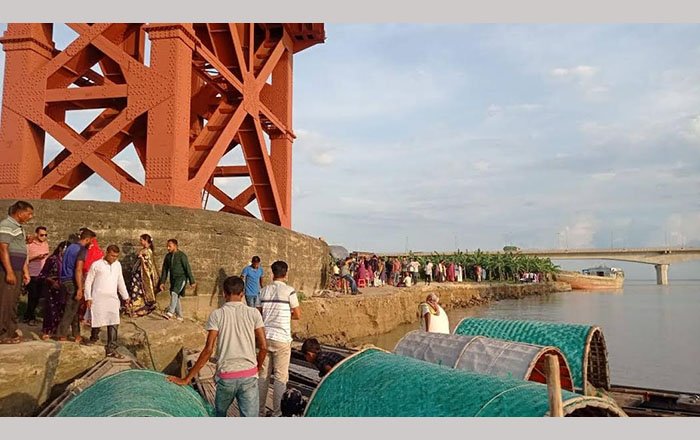 'When the bridge was constructed, it had piling in deep in the Padma river and at that time all the girders of the bridge were submerged in water, he said.

The soil accumulated under several girders due to char falling on one side of the river, now again this part of char is disappearing into the river, it will not cause any damage to the bridge, however, claimed that the erosion would not harm the bridge as its guide bank is well protected.

The engineer said we are monitoring the situation and we are contacting the Water Development Board to take measures to prevent the erosion.

Executive Engineer of Water Development Board Md Zahidul Islam Ripon said the bridge is unlikely to be damaged by river erosion, because the foundation of the bridge is very deep and the bridge is protected by the guide bank on both sides.

Kohinur Alam, Supervising Engineer of Water Development Board of Pabna, said we visited the bridge area but there is no possibility of destruction the bridge, resulted from the erosion.

The erosion is far from the guide bank. So I don't think that Hardinge Bridge is in the risk. I urged all not to confuse in this regard, he said.

Deputy Commissioner (DC) of Pabna Biswas Russell Hossain requested all not to be panicked by ongoing the Padma river erosion.