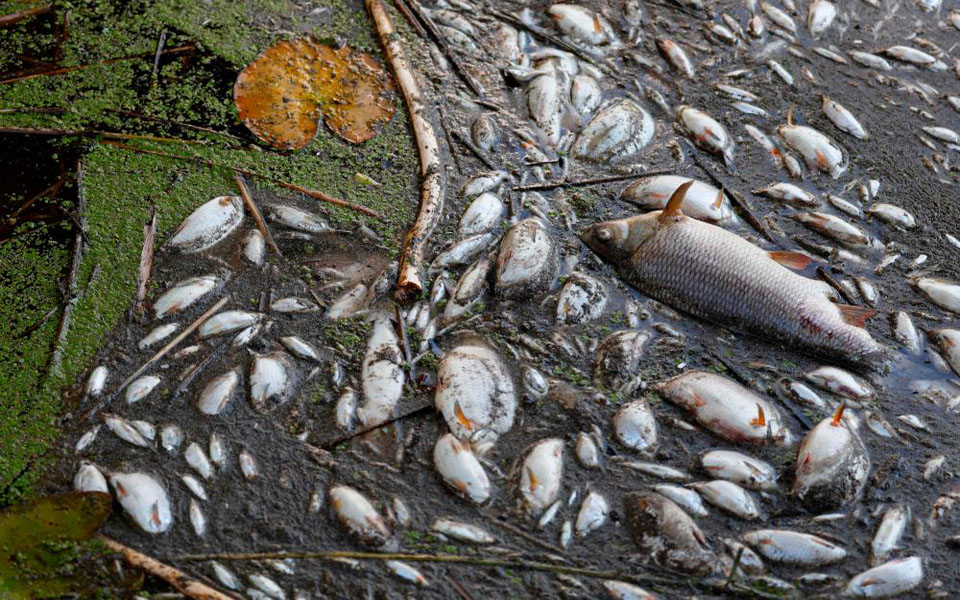 SCHWEDT, Germany, Aug 13, 2022 (BSS/AFP) - Thousands of fish have washed up dead on the Oder river running through Germany and Poland, sparking warnings of an environmental disaster as residents are urged to stay away from the water.

The fish floating by the German banks near the eastern town of Schwedt are believed to have washed upstream from Poland where first reports of mass fish deaths were made by locals and anglers as early as on July 28.

German officials accused Polish authorities of failing to inform them about the deaths, and were taken by surprise when the wave of lifeless fish came floating into view.

In Poland, the government has also come under heavy criticism for failing to take swift action.

Almost two weeks after the first dead fish appeared floating by Polish villages, Polish Prime Minister Mateusz Morawiecki said on Friday that "everyone had initially thought that it was a local problem".

But he admitted that the "scale of the disaster is very large, sufficiently large to say that the Oder will need years to recover its natural state."

"Probably enormous quantities of chemical waste was dumped into the river in full knowledge of the risk and consequences," added the Polish leader, as German Environment Minister Steffi Lemke urged a comprehensive probe into what she called a brewing "environmental disaster".

Standing by the riverbank, Michael Tautenhahn, deputy chief of Germany's Lower Oder Valley National Park, looked in dismay at the river on the German-Polish border.

"We are standing on the German side -- we have dead fish everywhere," he told AFP.

"I am deeply shocked... I have the feeling that I'm seeing decades of work lying in ruins here. I see our livelihood, the water -- that's our life," he said, noting that it's not just fish that have died, but also mussels and likely countless other water creatures.

"It's just the tip of the iceberg."
The Oder has over the last years been known as a relatively clean river, and 40 domestic species of fish make their home in the waterway.

But now, lifeless fish -- some as small as a few centimetres, others reaching 30-40 cm -- can be seen across the river. Occasionally, those still struggling to pull through can be seen flipping up in the water, seemingly gasping for air.

Officials believe that the fish are likely to have been poisoned.
"This fish death is atypical," said Axel Vogel, environment minister for Brandenburg state, estimating that "undoubtedly tonnes" of fish have died.

Fish death is often caused by the distortion of oxygen levels when water levels are too low, he explained.

"But we have completely different test results, namely that we have had increased oxygen level in the river for several days, and that indicates that a foreign substance has been introduced that has led to this," he said.

Tests are ongoing in Germany to establish the substance that may have led to the deaths, but there are early indications of extremely high levels of mercury -- although authorities said final results are still pending.

In Poland, prosecutors have also begun investigating after authorities came under fire over what critics said was a sluggish response to a disaster.

Tautenhahn said the disaster would likely carry consequences for years to come.

"If it is quicksilver, then it will also stay here for a long time," he said, noting that mercury does not disintegrate but would then remain in the sediments.