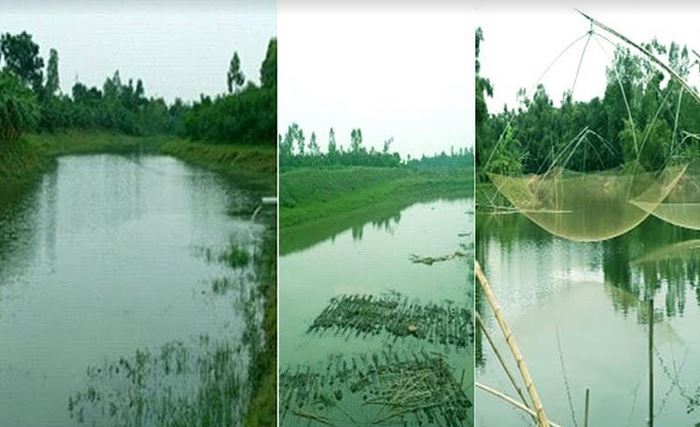 RANGPUR, Aug 3, 2022 (BSS) - A prospect of producing 50,000 tonnes of additional Aman paddy worth Taka 125 crore annually has been created from 10,000 hectares of land being got by re-excavation in water bodies in the greater Rangpur region.

Officials said the opportunity has been created following re-excavation of 66.80-kilometre of canals on the verge of extinction and rivers by Barind Multipurpose Development Authority (BMDA) freeing 10,000 hectares of land from water-logging in six upazilas of Rangpur, Kurigram and Gaibandha districts.

Under the five-year (2019-2024) term 'Expansion of irrigation in greater Rangpur district through best uses of surface water and conservation of rainwater project (EIRP)', BMDA implemented the re-excavation works in the last two years.

"I am cultivating Aman paddy on my two acres of land freed from water-logging for the first time in four decades," he said, adding that people are now rearing ducks, rotting jute plants and catching indigenous fishes in the canal.

Majibur Rahman of nearby village Kantaduar said he lifted water from the re-excavated Chatra canal using a low-lift pump and irrigated his crop land for transplanting Aman paddy seedlings during a recent drought-like situation.

Like others, Suman Sharif Mandal of the same village said, "I am cultivating Aman paddy on my three acres of land freed from water-logging following re-excavation of the extinct Charta canal."

"I am cultivating Aman paddy now on my 2.62 hectares of land freed from water-logging," he said, adding that he can now cultivate three crops, including Aman paddy, annually.

Housewife Momina Begum of nearby village Kamarpara said re-excavation of the extinct river Mora Teesta has become a blessing for local people again after four decades.

"Like many others, I am cultivating vegetables, banana and Napier grass on the banks and rearing ducks in the re-excavated river Mora Teesta to improve livelihoods," Momina added.

Golam Mortuza of village Kazipara in the upazila said re-excavation of the extinct river Ghirnoi has freed vast land area from water-logging allowing him to cultivate Aman paddy on his 1.50 hectares of land this season.

ABM Nizam Uddin of village Monur Chhara in Pirgachha upazila of Rangpur said the re-excavated extinct river Alaikumari and Jhinia canal have freed hundreds of hectares of land from water-logging.

"I am cultivating Aman paddy on my three acres of crop lands that became cultivable again for the first time in four decades," he said.

Chairman of Berubari union in Nageshwari upazila of Kurigram Abdul Motaleb said BMDA has re-excavated an eight-kilometre portion of the extinct Boalerdara canal freeing 700 hectares of land from water-logging for the first time in four decades.

"Water flow has been revived in the canal benefitting 15,000 people, including 1,200 farmers, who are using the conserved water there for irrigation, supplementary irrigation, rearing ducks, fish farming and household activities," he said.

"Thousands of people have started reaping benefits from the re-excavated water bodies by BMDA to facilitate drainage of rainwater and promote agriculture ensuring best uses of surface water," he said.

EIRP Project Director and Superintending Engineer of BMDA for Rangpur Circle Habibur Rahman Khan said thousands of people would enjoy multidimensional benefits after implementation of the project spending Taka 250.56 crore by 2024 next.

"We have already completed 35 percent project works by re-excavating 66.80-kilometre of extinct rivers and canals and freed 10,000 hectares of land from water-logging creating a chance to produce an additional 50,000 tonnes of Aman paddy annually," he said.