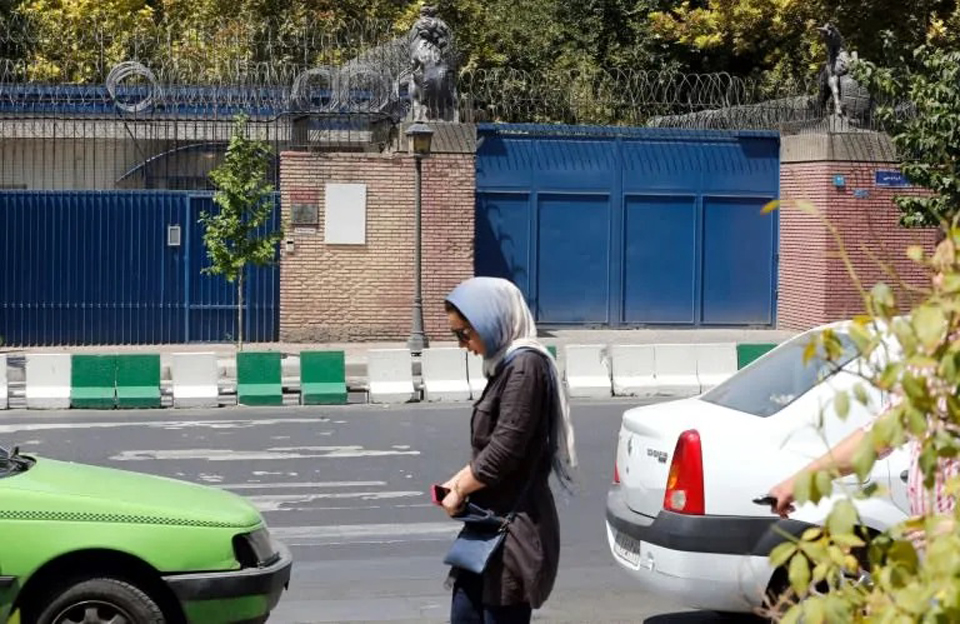 But the British government quickly denied that any of its personnel had been
arrested, describing the reports as "completely false".

The developments coincide with heightening tensions between Tehran and world
powers over long-stalled attempts to revive a 2015 nuclear deal and a recent
uptick in confirmed detentions of Western nationals in the country.

"The Revolutionary Guards' intelligence service identified and arrested
diplomats from foreign embassies who were spying in Iran," Fars said, adding
that a British diplomat was subsequently expelled from the country.

State television however reported that the Briton, identified as Giles
Whitaker, the UK government's deputy head of mission in Iran, was only
expelled from "the area" where the diplomats had been arrested in central
Iran.

State television accused him of "carrying out intelligence operations" in
military areas.

Video showed images of a man presented as Whitaker speaking in a room.

A state TV journalist said the diplomat "was among those who went to the
Shahdad desert with his family as tourists", referring to an area in central
Iran.

"As the images show, this person took photos... in a prohibited area where at
the same time a military exercise was taking place," the broadcaster said.

"Reports of the arrest of a British diplomat in Iran are completely false," a
foreign ministry spokesman said in London.

The number, nationality and date of arrest of the other diplomats detained
was not immediately clear.

But state television said that "apparently Israel wants to open a file on the
possible military dimension of Iran's nuclear program, using nationals from
third countries who are linked to foreign embassies," it charged.

Israel is staunchly opposed to the 2015 nuclear agreement between Iran and
world powers, perceiving it as a threat to its security.

State television also showed images of a man it identified as "Maciej
Walczak, head of the microbiology department at the Nicolaus Copernicus
University in Poland".

"This university is linked to the Zionist regime," it said, referring to
Israel.

Walczak, whose nationality was not specified, "entered Iran with three other
people in the context of scientific exchanges but he went to the desert
region of Shahdad as a tourist while missile tests were being carried out",
state television said.

It said he took rock and soil samples.

State television presented another man, identified as "Ronald, the spouse of
the Austrian embassy's cultural adviser" who it said went to a village in the
Damghan area east of Tehran and "took rock samples".

He was also accused of "filming a military area in Tehran," the broadcaster
said.

The US walked out of the Iran nuclear deal in 2018 under then president
Donald Trump, who proceeded to reimpose biting sanctions on Tehran, prompting
the latter to step away from many of the nuclear commitments it made under
the accord.

Iran has held direct talks with remaining parties to the deal -- and indirect
talks with the US -- since April 2021 in a bid to restore the deal, but those
negotiations have been at an impasse since March.

Qatar last week hosted indirect talks in Doha in a bid to get the Vienna
process back on track, but those discussions broke up after two days without
any breakthrough.

Over a dozen Western nationals are held in Iran in what activists argue is a
policy of hostage-taking aimed at extracting concessions from the West.

Belgium's parliament on Wednesday approved a controversial prisoner-swap
treaty with Iran in a first reading of a text that still has to be submitted
to a full vote to be ratified.

Also Wednesday Iran accused a French couple detained in May while on holiday
of allegedly "undermining the security" of the country, the judicial
authority said.

The French government has condemned their arrest as "baseless" and demanded
their immediate release.

She was released home to the UK along with another detainee early this year,
after the UK agreed to pay a longstanding debt to Tehran.