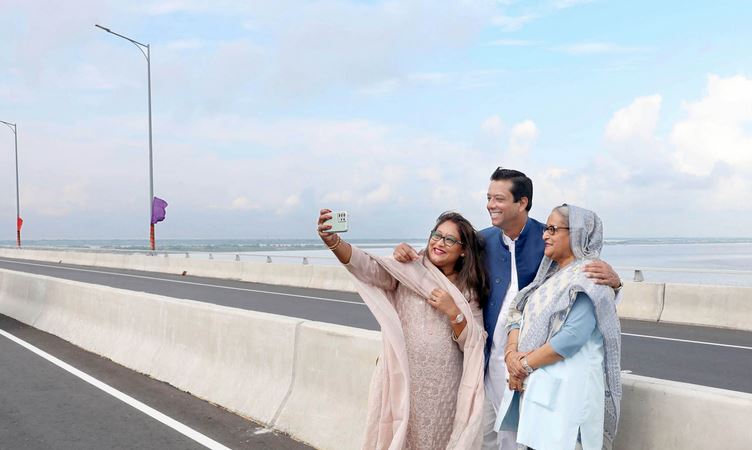 DHAKA, July 4, 2022 (BSS) - Prime Minister Sheikh Hasina today spent some
time on the Padma Bridge along with her son Sajeeb Wazed Joy and daughter
Saima Wazed Putul on her way to Gopalganj to visit her ancestral home in
Tungipara.

They also took photographs on the Padma Bridge before going to their
ancestral home crossing the bridge for the first time this morning since its
inauguration to traffic on June 25 last.

Joy, also the premier's ICT affairs adviser, posted a photograph (selfie)
from his verified facebook account while numerous facebook users also shared
it from their accounts.

In the selfie, Sheikh Hasina, her son Joy and daughter Putul are seen in
joyful faces cheering their journey through the bridge which has made the
dreams come true for millions.

They also took rest for a while in Janjira point's service area.

The Prime Minister earlier paid rich tributes to Bangabandhu by placing a
wreath at his mausoleum.

After laying the wreath, she stood in solemn silence for some time as a mark
of profound respect to the memory of the architect of the independence, who
was brutally killed by some disgruntled army men on the dreadful night of
August 15, 1975 along with most of his family members.

The Premier reached Dhaka at around 5:30 pm.