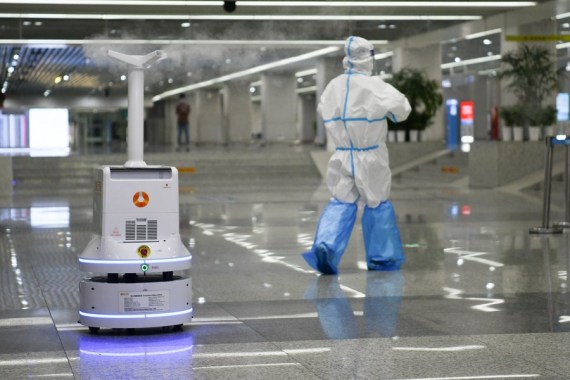 lockdown in central Anhui province, where authorities reported nearly 300 new
cases Monday in the latest of a string of outbreaks testing Beijing's no-
tolerance approach to Covid-19.

The country is the last major economy wedded to a zero-Covid strategy,
responding to all cases with strict isolation orders and tough testing
campaigns.

The outbreak in Anhui -- where officials first found hundreds of cases last
week -- comes as the Chinese economy begins to rebound from a months-long
lockdown in Shanghai and disruptive Covid restrictions in the capital
Beijing.

Two counties in the province -- Sixian and Lingbi -- announced lockdowns last
week, with more than 1.7 million residents only permitted to leave their
homes if they are getting tested.

Footage from state broadcaster CCTV showed empty streets in Sixian over the
weekend and people lining up for their sixth round of mass testing in recent
days.

The province reported 287 new infections on Monday, including 258 people who
had no symptoms, according to China's National Health Commission, bringing
the total cases found to just over 1,000.

Provincial governor Wang Qingxian urged local authorities to "seize every
minute and earnestly implement quick screening" as well as rapid quarantine
and reporting of cases, in a statement published by the Anhui government on
Monday.

But the strategy has hammered the world's second-largest economy and heavy-
handed enforcement has triggered rare protests in the tightly controlled
country.

China's international isolation has also prompted some foreign businesses and
families with the financial means to make exit plans.

But health official Lei Zhenglong has insisted the new quarantine policy was
"absolutely not a loosening of (Covid) prevention and control".