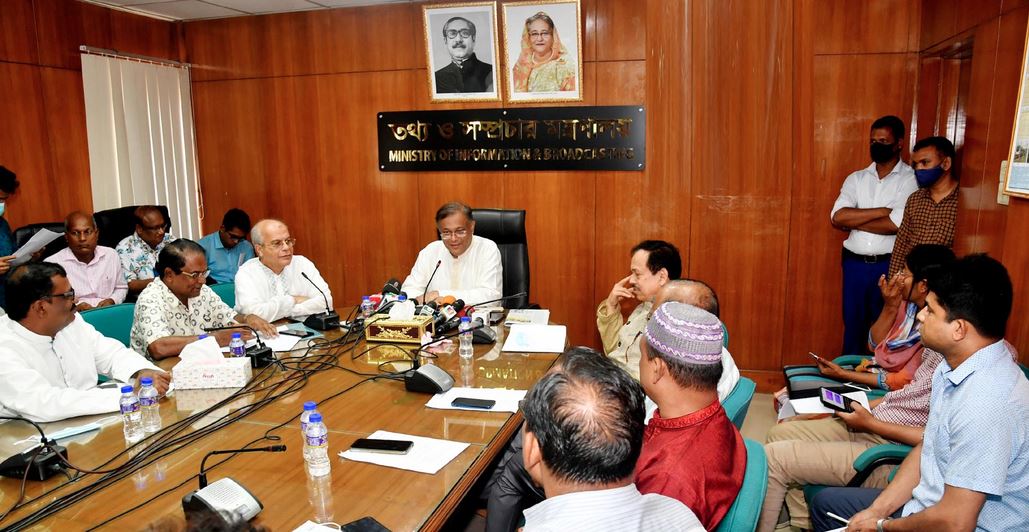 DHAKA, July 3, 2022 (BSS) - Information and Broadcasting Minister Dr Hasan Mahmud today said the people get annoyed with BNP for different reasons as the party doesn't do politics over public issues.

"BNP doesn't speak for people. They only talk about Khaleda Zia's health condition and Tarique Rahman's punishment. They hurl petrol bombs on people. As a politician I get hurt witnessing such acts of BNP," he said.

Hasan, also Awami League joint general secretary, said this while replying to journalists at his ministry's meeting room at the Secretariat here.

Actually BNP is making itself ridiculous by commenting in that way and that is why the people never respond to their call for movement, he said.

Earlier, the minister joined a discussion with Bangladesh Editors Forum.

Forum's adviser Iqbal Sobhan Chowdhury said media will have to go ahead keeping intact the principles and ethics of journalism.

Convener of the forum Rafiqul Islam Ratan said according to Printing Presses and Publications Act, there is no scope for online version of newspapers or news portals to broadcast talk-show or news bulletin
.
The Forum leaders handed over a 10-point demand written in a letter to the minister.

The demands included stopping providing government advertisement and supplement to irregular so-called newspapers and scrapping media inclusion of those newspapers, paying outstanding advertisement bills to newspapers, reorganizing the system to specify circulation of newspapers, not giving editorial charge to non-professional journalists, providing VIP status to Editors Forum members and giving the power to the Information and Broadcasting Ministry to include journalists in different committees and issuing declaration in newspapers.

Hasan thanked the Forum for agreeing with Association of Television Channel Owners (ATCO) that it is not the work of online news portals or online versions of newspapers to broadcast talk-show or news bulletin as per law.

"It will help us talk with others and the matter could be presented easily. Small video clips can be uploaded with online reports but news bulletin or talk-show cannot be broadcast as per law," he said.

The minister said Press Council has already taken initiative over the issues placed by the Editors Forum.

He said an initiative has been taken to create a database of working journalists. Upon completion of the database, it will be understood who are in the list of journalists or not, he said.

It will be tough for non-journalists to give their identity as journalists, he said.

Hasan gave assurance of making his utmost sincere efforts in paying the due advertisement bills to newspapers.

"I won't say that I will be able to resolve all issues but there is no lack of sincerity to this end. With your cooperation, many issues have already been resolved and hopefully the rest of those will also resolve," he said.