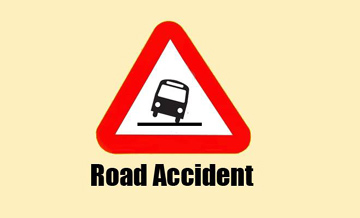 DHAKA, July 2, 2022 (BSS) - Two people were killed in separate road accidents in Gulistan and Agargaon areas in the capital on Friday night.

One of the victims was identified as Habibur Rahman Khokan, 30, son of Akbar Ali of Uzirpur Thana in Barisal. The other person's identity was not known immediately.

Family sources said that around 9:30pm on Friday, Rahman met with a bike accident near Agargaon Sher-e Bangla thana area and was rushed to the National Institute of Neurosciences and Hospital in a critical condition.

As his situation worsened, Rahman was taken to Dhaka Medical College and Hospital (DMCH). He later succumbed to his injuries around 11pm.

In a separate incident in Gulistan Hall market area in the capital, an unidentified man, 25, was critically injured after being hit by a speeding bus around 11:50pm on Friday.

He was also taken to the emergency department of DMCH, where the duty doctors declared him dead around 1am.

DMCH police outpost Officer-in-Charge (OC) Md Bachchu Mia confirmed the incidents to BSS saying that, the bodies have been kept on the morgue for autopsy, and the concerned police stations have been informed about the accidents.