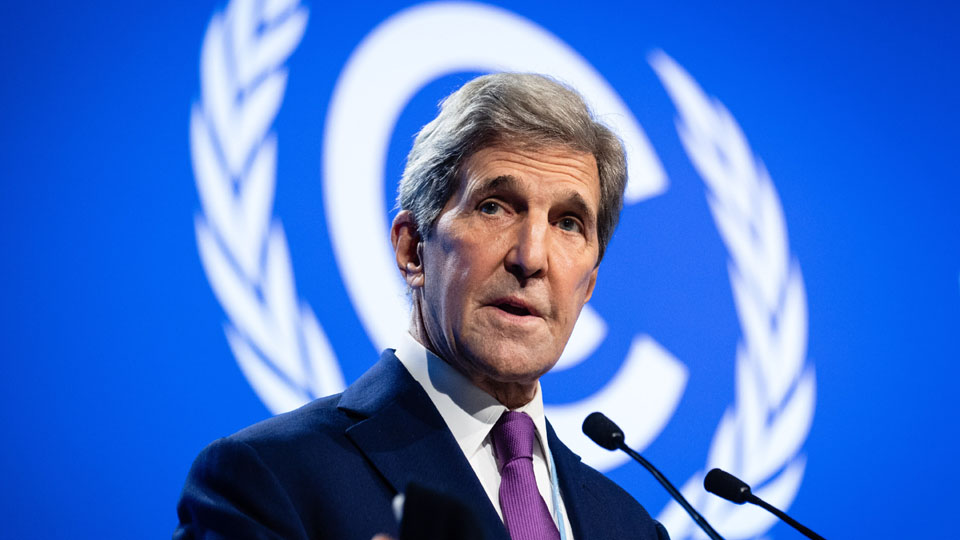 "But obviously it would help if we had a majority of the Supreme Court in the United States of America that actually understood the gravity of the situation and was more willing to try to be helpful rather than present a hurdle of one kind or another," he said.

President Joe Biden, after defeating the climate-skeptic Donald Trump, in April last year said the United States would reduce greenhouse gas emissions by 50 to 52 percent by 2030 from 2005 levels, dramatically increasing the climate ambitions of the world's largest economy.

He submitted the so-called nationally determined contribution to the UN climate body in line with the 2015 Paris Agreement, the landmark deal brokered by Kerry when he was secretary of state.

China, the world's largest carbon emitter, called Friday on all nations to live up to Paris commitments, with foreign ministry spokesman Zhao Lijian saying of the United States, "it is not enough to just chant slogans."

Kerry, who has worked with Chinese officials in his climate role despite soaring tensions between Beijing and Washington, said that he was "not surprised by the messaging" from the Asian power.
"We will show China precisely how we're going to get the job done," Kerry said.

Stephane Dujarric, the spokesman for UN Secretary-General Antonio Guterres, called the Supreme Court decision "a setback in our fight against climate change."

Despite Biden's pledges to wean the United States off fossil fuels, the Interior Department on Friday released a five-year proposal that would authorize offshore oil and gas drilling in federal waters in the Gulf of Mexico and Alaska, although it would still ban drilling in the Atlantic and Pacific Oceans.

The proposal comes amid soaring gas prices and as Biden seeks to woo Senator Joe Manchin, a Democrat from coal-producing West Virginia with the crucial vote, to back a package that would also boost clean energy.

Environmentalists see the legislation as a last hope amid expectations that Trump's Republican Party will make advances in November congressional elections.

The Supreme Court, finishing a term in which three justices nominated by Trump pushed it sharply to the right, on Thursday cut the wings off a key way in which the government could have tackled climate change without fresh legislation.

In a 6-3 ruling branded "devastating" by Biden, the top court said the Environmental Protection Agency did not have authority to order sweeping cuts on emissions from coal-fired power plants.

"I am convinced -- and our legal people are looking at it very carefully -- that this decision leaves plenty of latitude for us to be able to do a lot of things that we need to do," Kerry said.

Asked about calls by some lawmakers from his Democratic Party for Biden to declare a climate emergency, Kerry said, "I think the president needs to evaluate every option available."

Coal accounts for around 20 percent of US electricity generation -- still roughly on par with renewables. China, despite investing heavily in wind and solar, has also kept building coal production capacity.

But Kerry said that the marketplace showed that coal was not the future.
"Nobody's going to fund any new coal power in the United States -- no bank, no private lender. Coal is the dirtiest fuel in the world," he said.

Scientists warn that the world is far off track in avoiding the worst ravages of climate change including severe heatwaves, floods, droughts, rising sea levels and storm surges.

The Paris accord set the goal of limiting end-of-century warming to two degrees Celsius (3.6 Fahrenheit) above pre-industrial levels -- and preferably not beyond 1.5 degrees -- but the planet has already warmed by nearly 1.2 Celsius.

Ruth Greenspan Bell, a climate expert at the Woodrow Wilson International Center for Scholars, said it was difficult for the United States to show climate leadership while also fighting internally on whether it is a priority.

"It's kind of putting a pin into a balloon. There's a little bit less air in the balloon than there was before," she said of the court decision.
"The times call for a moonshot but imagine trying to pull off a moonshot when you are at the same time in a defensive crouch."