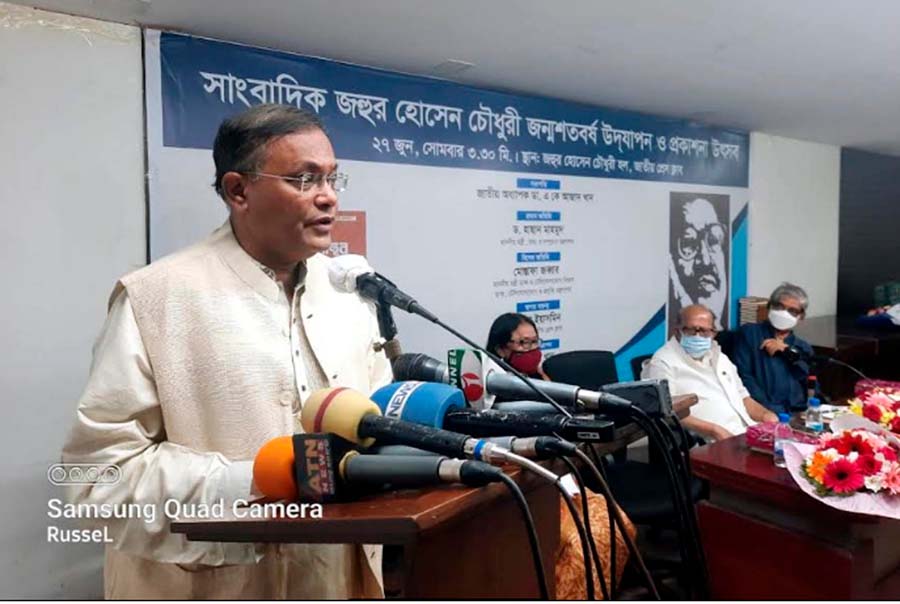 Posts and Telecommunications Minister Mustafa Jabbar addressed the discussion as the special guest with National Professor Dr AK Azad Khan in the chair.

But the thoughts of the nation could not develop if some eminent persons, writers, intellectuals and journalists didn't make unparallel contributions from behind, he said, adding that Zahur Hossain Chowdhury is one of them.

Noting that journalism is not only a profession, rather it is a motto to many journalists, the information minister said journalists play key role in building a nation.

"We need to build a humanitarian social welfare state, not to make only material development like the western society," he mentioned.

Flouring of human values which is declining day by day is needed for this as human beings are becoming machines with the use of machines for development, he said.

"Human beings should be saved and society should be protected from it and development of human values is required for that," Hasan said.

He said it is the duty of politicians to help the nation make dreams and here journalists have a big role to play.

"Many reports of journalists make cry and think even a strong-minded person like me whom Chhatra Shibir wanted to kill twice, who narrowly escaped the death in the August 21 grenade attacks and faced junctures of death many times," Hasan said.

Paying homage to journalist Zahur Hossain Chowdhury, he urged the journalists to contribute to build a state having humanitarian and social values in current context following the footprints of Chowdhury who opened up third eye of the society and the country, gave guidelines for proper thinking through their write-ups nurturing ethics and principles of journalism in his entire life.

Posts and Telecommunications Minister Mustafa Jabbar described Chowdhury's merit and conscientious journalism as an example in the journalism arena.

Even during the Pakistan rule, Chowdhury built the country's foundation of journalism and he will stay alive forever through his works, he said.

Later, the guests and organizers unveiled the cover of a book titled "Darbar-e-Zahur Column", a compilations of columns by Zahur Hossain Chowdhury published in different newspapers.