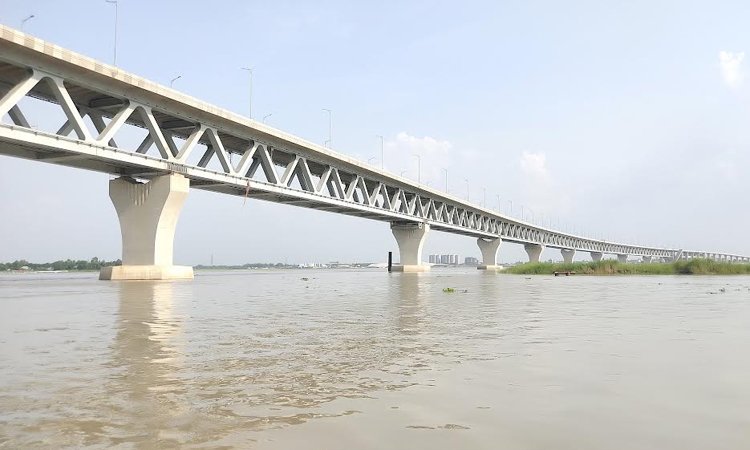 Tungipara (Gopalganj), June 26, 2022 (BSS) - On the first day of opening of the Padma Bridge, people from all walks of life were seen crossing the bridge with utmost excitement and happiness after the bridge was opened for vehicular movement from 6am today.

After crossing the bridge, people expressed their satisfaction with a joyous and happiest look in their face and extended gratitude to the Prime Minister Sheikh Hasina for making the dream of country's 180 million people come true.

Sexagenarian Abul Mehedi Hasan, after crossing the Padma Bridge from Dhaka, said, "I feel proud to cross the Padma Bridge alive as there is no doubt we are witnessing a history. I have witnessed the history. Completion of the bridge was possible even with self finance because of the courage and bravery of the Prime Minister Sheikh Hasina.

"We are proud of Prime Minister Sheikh Hasina, daughter of Father of the Nation Bangabandhu Sheikh Mujibur Rahman," he added.

"It used to take two days to reach Tungipara from Dhaka by launch in 1984. After came into power in 1996, Sheikh Hasina formed the government and she brought some development to the roads and highways. Then she planned to build the Padma bridge which is now not a dream anymore," said Shyamal Malo (52) of Patgati village, a passenger of Tungipara Paribahan.

"I have no word to express how much happy I am right now as it was a dream of millions of people," he said, adding, "Bangabandhu's daughter Sheikh Hasina has shown the capacity of Bengali nation to the whole world."

"On the first day, there was huge crowd of curious people who came to visit the Padma Bridge. However, as soon as the car got on the bridge, the passengers become excited and enthusiastic to see the beauty of the most anticipated bridge," said Dola Paribahan supervisor Riaz Ahmed.

Mehedi Hasan, driver of the Tungipara Express, said, "We had to wait because of the crowd at the toll plaza of the Padma Bridge." Whenever the car got on the Padma bridge. That's when the passengers became overwhelmed with joy.

Siraj Sheikh, a trader of Patgati Bazar in Tungipara Upazila, said, "Padma Bridge is our identity. After the reaching the Padma Bridge, my heart was mesmerized with joy and pride."

Excluding the jam due to toll payment, it took only two and a half hours from Dhaka to Tungipara, he said, adding, "Even I will take the goods directly to Dhaka through this bridge. I will be benefited by selling products at higher prices."

Tungipara Upazila Awami League president Sheikh Abul Bashar Khair said Tungipara get connected with the capital city through the Padma Bridge which was isolated from Dhaka for long due to river Padma.

Opportunities for business and industry will increased in the area which ultimately creates positive impacts on this region's economy along with increasing people's income, he said, adding, "The socio-economic condition of the people of Tungipara will also change drastically."