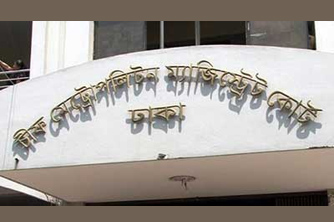 Musa gave his confessional statement at the court of Dhaka Metropolitan Magistrate Mohammad Sheikh Sadi. After that the court sent Musa to jail.

Earlier the police produced Musa, believed to be the mastermind behind the double-murder, before the court and investigation officer Detective Branch (DB) of police Mohammad Yasin Shikder pleaded to record his statement under section 164.

Dhaka Metropolitan Magistrate Asheq Imam on June 22 placed Musa on a three-day fresh remand in the case. Musa was placed on six-day remand for the first time on June 10 and again was remanded for four-day on June 17.

Musa was named as the main mastermind and coordinator behind the killing, by the actual shooter Masum Mohammad alias Akash. Musa after hiring the killer and arranging arms and a gateway bike for the killer, left Dhaka for Dubai on March 12.

He later went to Oman and got arrested there on May 12. A team of Bangladesh Police went there and brought him back to the country on June 9.

Tipu, former general secretary of Motijheel Awami League, was on his microbus destined for his Khilgaon home on the night of March 24. He was shot dead by a masked assailant in the capital's Shahjahanpur area as his vehicle got stuck in traffic.

Rickshaw passenger Samia Afran Prity was also got shot by stray bullets and died on the spot. Tipu's driver Munna got shot on his hand in the incident.