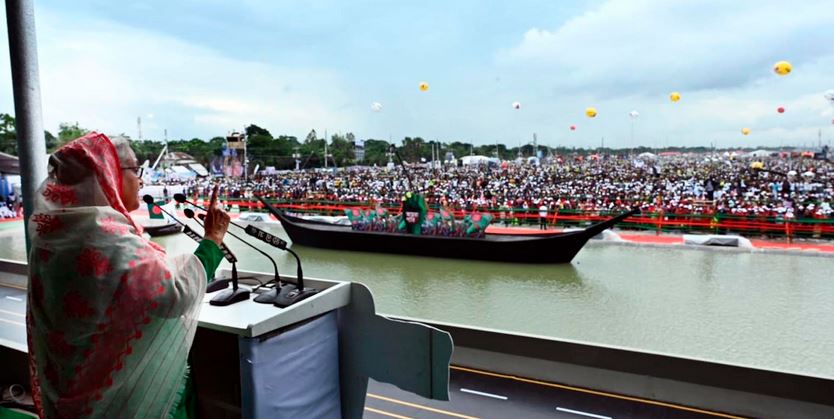 DHAKA, June 25, 2022 (BSS) – The people of the country have become very happy as the long-cherished Padma Multipurpose Bridge was inaugurated today.

Taslima Sumi, teacher of a well-known school in Dhaka, expressed her gratitude towards Prime Minister Sheikh Hasina for constructing the Padma Bridge with country’s own funds.

While watching the grand opening ceremony of the bridge on Television with her spouse at home, she happily said: "Whenever I will cross the Padma, I will salute Prime Minister Sheikh Hasina and express my gratitude to her."

As her refection of the happiness, she mentioned that she had not done any domestic work since the morning so that she could watch the inaugural programme of the Padma Bridge on television.

Ram Das, who sews and polishes shoes in the capital's Paltan area, expressed his eagerness to visit the Padma Bridge soon.

"Thank you, Prime Minister for constructing it. I am looking forward to seeing the bridge," he told BSS.

A father of a student studying in an Indian state told BSS: "My son called me last night and expressed his excitement about the Padma Bridge.”

“He is very happy for the inauguration of the Padma Bridge as he will be able to move from Kolkata to Dhaka by travelling for only three and a half to four hours now.”

Even the grand opening of the Padma Bridge has also made impacts on the mindsets of the children and as a result, the innocent children also are expressing their wishes to parents or guardians for visiting the mesmerizing bridge site.

The headmaster of a private school in the capital said that the students of his school wanted to see the bridge.

The same thing was said by a guardian who works in a private company.

He said that his wife and children are frequently telling him for visiting the bridge.


Sheikh Hasina inaugurated the bridge over one of the world's mightiest rivers connecting southwestern Bangladesh with the capital and other parts while both the streams are considered powerful in terms of their length, water discharge and morphological trends.

The premier unveiled the plaque of the Padma Bridge this morning at Mawa end at a colorful ceremony where thousands of distinguish guests, including foreign diplomats were present.

The event came 25 years after she opened the Bangabandhu Bridge on the Jamuna River, another most powerful stream, linking northwest with Dhaka and other parts of the country in 1998 when that was Bangladesh's longest multipurpose bridge.