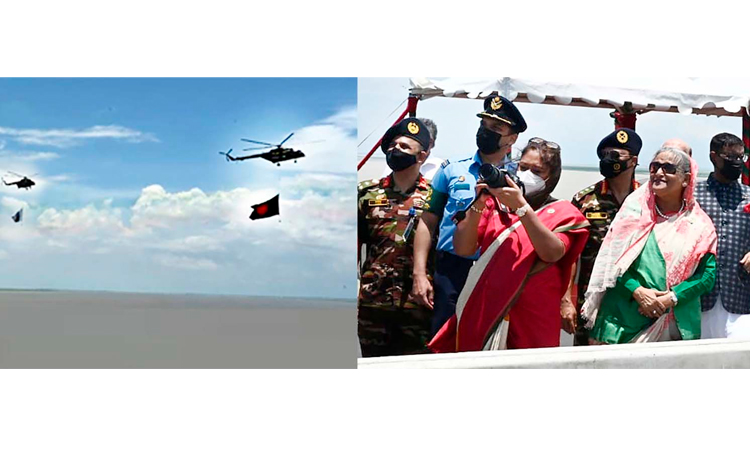 Besides, a Bell-212 helicopter dropped leaflets for guests who joined the inaugural ceremony of the bridge.

An aerobatic show by seven K-W and a MIG-29 marked the conclusion of the air show in line with the celebration mood of the event.

The premier was seen showing her companions the artistic BAF display while her daughter Saima Wazed Putul was capturing different photographs with a camera in a cheerful mood.

The premier unveiled a plaque at Mawa end in Munsiganj and entered the mega structure by paying toll herself at 11.47am, which has emerged in the globe as a signature of her extra courageous leadership.

Jatiya Sangsad Speaker Dr Shirin Sharmin Chaudhury, Road Transport and Bridges Minister Obaidul Quader and Cabinet Secretary Khandker Anwarul Islam, among others, accompanied the premier at the midpoint of the bridge while thousands of people on both sides of the river witnessed with applause the show.

Soon after the Prime Minister crossed the bridge after the BAF air show, the eagerly awaiting people were allowed to walk along the bridge for the first as well as the last time, since the structure is prohibited for the walking people beyond the viaduct point due to security reasons.

The people are allowed to walk up to the viaduct of the bridge without reaching the main structure.