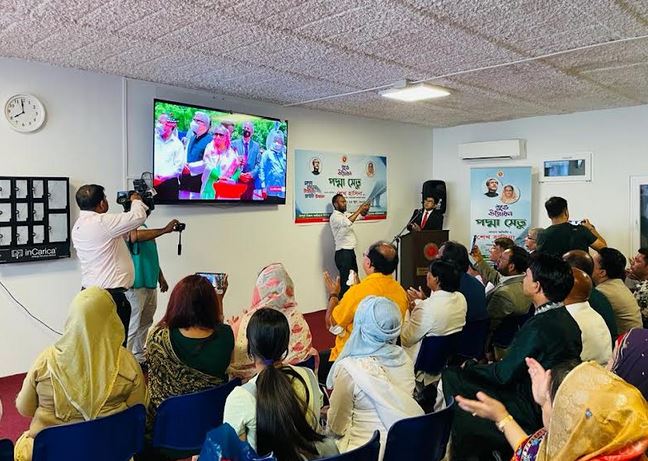 DHAKA, June 25, 2022 (BSS) – Bangladesh missions abroad have celebrated the grand inauguration of the long-cherished Padma Multipurpose Bridge through different programmes with much enthusiasm.

The programmes included reading out the messages of the president and the prime minister, offering special prayers seeking eternal peace of the departed soul of Father of Nation Bangabandhu Sheikh Mujibur Rahman and for the prosperity and welfare of the country, cutting cakes, screening videos on Padma Bridge and holding discussions, the messages said.

As part of the observance, the Bangladesh Embassy in Washington DC organised a discussion session at its Bangabandhu Auditorium on Friday night before the grand opening of the bridge in Bangladesh on Saturday (June 25).

Taking part in the discussion, Bangladesh Ambassador to the USA M Shahidul Islam said: “The Padma Bridge is our pride and it's a symbol of our glory and self-dignity.”

The Ambassador said Prime Minister and Bangabandhu's worthy daughter Sheikh Hasina has fulfilled the long-aspired dream of 180 million people of the country by completing the work of the bridge with Bangladesh's self-funding.

He said by building the bridge, the Prime Minister has shown the whole world that Bangabandhu's Bangladesh has the capacity and capability to implement such a mega project.

The WB vice-president said the construction of Padma Bridge is a matter of glory for the country.

The country's connectivity witnessed huge progress in the last few years, and the Padma Bridge has further improved the sector, he said.

Junaid Ahmed expressed the hope that the Padma Bridge would make significant contribution to Bangladesh’s attainment of a middle income country status as well as graduation to a higher income county soon.

He termed the relationship between the World Bank and Bangladesh as deep, saying that the World Bank is continuing support to Bangladesh's different sectors including local government and energy.

Prof Nasir in his speech highlighted various positive impacts of Padma Bridge on the country's economy apart from strengthening the communication sector.

He said the dreams of millions of Bangalees have been fulfilled for Padma Bridge which was built under courageous and prudent leadership of Prime Minister Sheikh Hasina.

Earlier, a documentary on the Padma Bridge was screened and the messages issued by the President and the Prime Minister on the occasion of the opening of the bridge were read out.

The Bangladesh Chancery was illuminated marking the grand opening of the Padma Bridge.

Officials and employees of the Embassy later witnessed the live telecast of grand opening ceremony of the Padma Bridge which directly linked 21 south and southwestern districts with capital Dhaka and other major cities.

Bangladesh Consulate General in New-York celebrated the historic moment of the opening of the Padma Bridge by organizing a special event on the consulate premises with the participation of a significant number of expatriate Bangladeshis, including New York-based heroic freedom fighters and political, social, cultural and media leaders and prominent personalities of the community.

Everyone enjoyed the live broadcast of the inauguration ceremony of the Padma Bridge.

During the time, the Consul General of the Bangladesh Consulate General in New York Dr Mohammad Monirul Islam described the Padma Bridge as a symbol of confidence and motivation for the people of the country.

The day was observed on a limited scale due to the global pandemic situation.

Bangladesh High Commission in Islamabad, Pakistan observed the day with much enthusiasm.

On this occasion, the embassy-premises was decorated with colorful banners and posters.

In a discussion, High Commissioner of Bangladesh in Pakistan Muhammad Ruhul Alam Siddique said: “We are all very happy with the auspicious inauguration of the Padma Multipurpose Bridge, a symbol of self-reliance and self-respect of Bangladesh.”

At the end of the discussion, a video on the Padma Multipurpose Bridge construction project was screed.

At this time, the High Commissioner cut a cake on the occasion of inauguration of Padma Bridge.

Besides, special prayers were offered seeking the forgiveness for the soul of the father of the nation and for the prosperity, progress and welfare of the country and the nation.

While celebrating the day in Vietnam, Bangladesh Ambassador to Vietnam Samina Naz remembered the greatest Bengali of all time, Father of the Nation Bangabandhu Sheikh Mujibur Rahman under whose leadership and direction the country’s independence was achieved, with due respect.