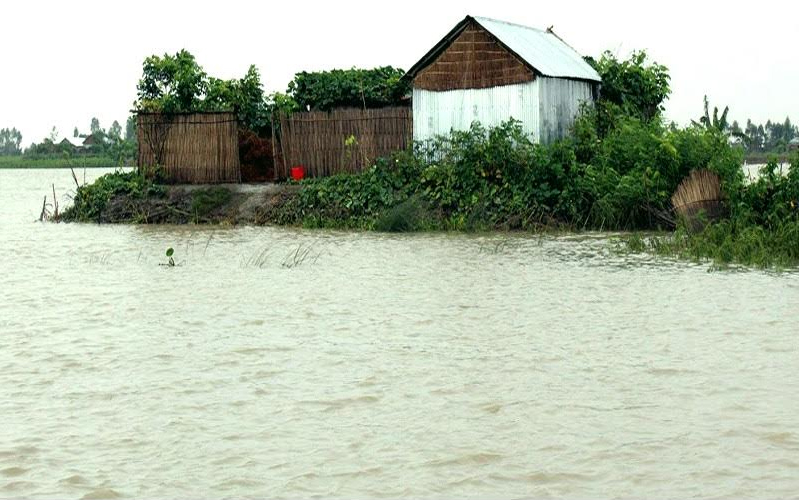 RANGPUR, June 24, 2022 (BSS) - Displaced people started returning homes at
some places following a further improvement in flood situation in the
Brahmaputra basin during the last 24 hours ending at 9am today.

Officials of Bangladesh Water Development Board (BWDB) said water levels of
all major rivers marked sharp falls following reduction in the rate of
onrushing water from upstream during the period in the basin.

The improving trend might continue with further fall in water levels of all
major rivers in Rangpur, Nilphamari, Kurigram, Lalmonirhat, Gaibandha,
Jamalpur, Bogura and Sirajganj during the next 24 hours.

According to a bulletin of the Flood Forecasting and Warning Center (FFWC) of
BWDB, the recorded rainfalls during the last 24 hours ending at 9 am today
were only 63mm at Pasighat and 43mm at Gangtok points of the northwestern
Indian states.

No rainfalls were recorded inside Bangladesh in the Brahmaputra basin during
the last 24 hours.

In the next 48 to 72 hours, there is a chance of medium to heavy rainfall in
the sub-Himalayan West Bengal and water level of the river Teesta may rise
and remain near the danger mark.

"Flood situations in Kurigram, Gaibandha, Bogura, Sirajganj and Jamalpur may
continue to improve in the next 24 hours," the bulletin added.

BWDB officials said the Brahmaputra and Jumna were still flowing above the
danger marks at six points in Kurigram, Jamalpur, Bogura and Sirajganj
districts today.

Water level of the Dudhkumar marked a sharp fall by 21cm at Pateshwari in
Kurigram during the last 24 hours and was flowing below the danger marks by
51cm there at 9 am today.

Water levels of the Teesta also marked falls by 3cm at Dalia and 28cm at
Kawnia points during the period and were flowing below their respective
danger marks by 48cm and 62cm at these points by the same period.

Besides, water levels of the Brahmaputra marked fall by 34cm at Noonkhawa,
34cm at Hatia and 32cm at Chilmari and 36cm at Fulchhari points during the
last 24 hours.

The Brahmaputra was still flowing above the danger mark by 34cm at Hatia and
36cm at Fulchhari points at 9 am today.

The river was flowing below the danger mark by 39cm at Noonkhawa and at the
danger mark at Chilmari points today.

Water levels of the Jamuna marked sharp falls by 31cm at Bahadurabad, 27cm at
Sariakandi, 27cm at Kazipur and 18cm at Sirajganj points during the last 24
hours.

At 9 am today, the Jamuna was still flowing above its danger mark by 13cm at
Bahadurabad, 27cm at Sariakandi, 26cm at Kazipur and 27cm at Sirajganj points
in the Brahmaputra basin.

According to the District Relief and Rehabilitation officers (DRROs), relief
activities have been intensified further in the flood-hit districts despite
continuous improvement of the flood situation since yesterday.

Rangpur DRRO Md. Motahar Hossain said distribution of 25 tonnes of rice and
Taka one lakh continues among the flood-hit people of Gangachara upazila in
the district.

Kurigram DRRO Abdul Hye Sarker said 1,52,388 people of 38,097 families in 319
villages of 49 unions under all nine upazilas were marooned in the district,"
he said, adding that floodwater is receding from most affected areas.

The district administration with upazila administrations and public
representatives continues distributing 538 tonnes of rice, Taka 36.50 lakh
and 1,000 packets of dry foods among the flood-hit people of the badly flood-
affected district.

"Besides, distribution of baby foods worth Taka 18.95 lakh and fodders of
cattle heads worth Taka 17.75 lakh also continues among the deluge-hit people
of the district where 85 medical teams are providing health services to the
flood-victim," the DRRO added.