Bangladesh to be a developed country before 2040: Amu 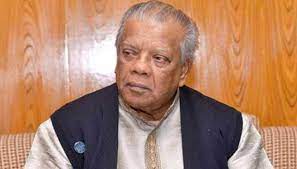 DHAKA, June 23, 2022 (BSS) - Awami League Presidium member Amir Hossain Amu today said the country will be a developed one before 2040 under the leadership of Prime Minister Sheikh Hasina.

"Bangladesh will be a developed country before stipulated timeframe of 2040 under the dynamic leadership of Prime Minister Sheikh Hasina," said the ruling party lawmaker while delivering his address under point of order marking 73rd founding anniversary of Bangladesh Awami League at the Jatiya Sangsad here.

He said all the achievements including the independence of the country were achieved under the leadership of the Awami League.

Earlier, ruling party senior leader Tofail Ahmed of Bhola-1 said, "If the Awami League was not formed then the freedom of speech would never be achieved."

Sheikh Mujibur Rahman was conferred the title of 'Bangabandhu' during a public reception held at Suhrawardy Uddayan and then Race Course Maidan in 1969, said the veteran lawmaker in his address to mark the founding anniversary.

Recalling the assassination of Bangabandhu Sheikh Mujibur Rahman on August 15 in 1975, Tofail said, "Most of his family members except Sheikh Hasina and her younger brother Sheikh Rehana were killed at that night. It’s our bad luck that we could not protect Bangabandhu," he added.