Padma Bridge was possible only for Sheikh Hasina: Hasan 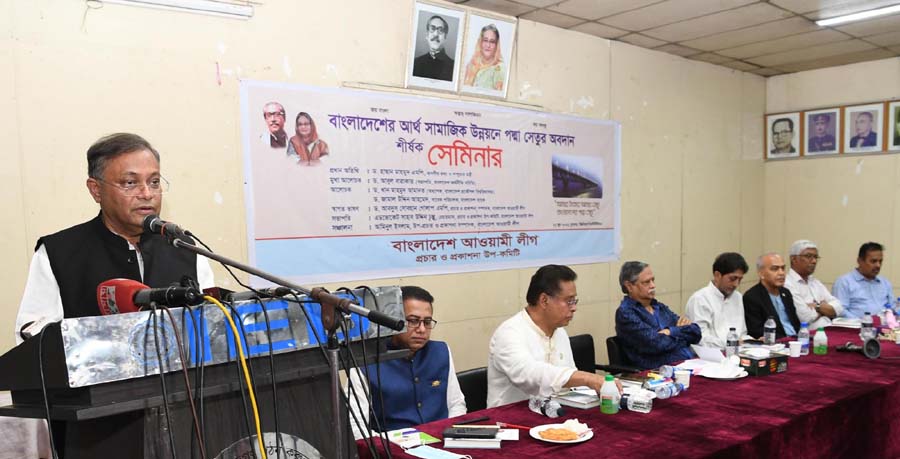 "Bangabandhu's worthy daughter, Awami League President and Prime Minister Sheikh Hasina has proved that proper and bold political leadership can make impossible into possible. The Padma Bridge is not only a bridge, it is an ability of the Awami League government, above all Prime Minister Sheikh Hasina showing thumb to world conspirators," he said.

The minister said it was possible to implement such a mega project only for Prime Minister Sheikh Hasina avoiding threats and flouting all conspiracies and criticisms of the World Bank and their accomplices and BNP-Jamaat.

Hasan stated these while addressing a seminar on 'The role of the Padma Bridge in Socio-Economic Development of Bangladesh' organized by Publicity and Publication Sub-Committee of Awami League at Engineers Institution in the capital.

He said some, who were in leading and involved in conspiracies, became silent and they are not found. Some have changed their tones, he added.

He said hurdles were not only outside of the government rather some were also hesitant inside the government also. For this, the Premier had to face challenges while taking decisions and she presented the reality at today's press conference, said Hasan, also AL joint general secretary.

He said the Padma Bridge has proved that the people, who criticized the government for no reason and conspiring against the government, they should alert before making statements. BNP feels ashamed, but invitation for the inaugural function of the bridge has been sent to them, he added.

“The Prime Minister has constructed the bridge for all countrymen. And the bridge is for Begum Khaleda Zia and Mirza Fakhrul also.

“But now the question is that the persons, who claimed that the Awami League government could not construct the bridge or if they could complete the bridge it will be done with patchwork and none will use it, should they get on the bridge?" he added.

The minister said they should seek apology to the countrymen before using the bridge.

He said the estimated expenditure has remained the same. The cost would have been lower if it had not been delay due to conspiracies. The Premier has saved at least Taka 20,000 crore in the construction of the bridge, he added.

He said the construction cost of the bridge was supposed to Taka one lakh thousand crore.