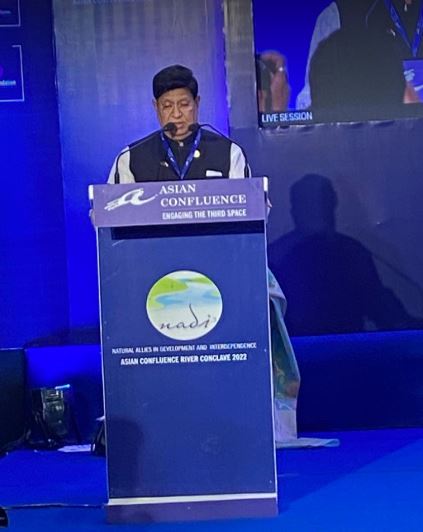 He made this statement while delivering special address at the inaugural session of the two-day long NADI-3 (Natural Allies in Development and Interdependence) Conference that began today in Guwahati, Assam, a foreign ministry press release said here.

In his statement, Dr. Momen stressed that rivers are the lifeline of Bangladesh and have influenced the traditions, culture, music, lifestyle and livelihood of the country’s people.

He emphasized that just sharing of waters of transboundary rivers and basin wide river management is essential for sustainability of rivers.

The foreign minister stressed on the need to maintain healthy rivers to facilitate waterways connectivity.

He underscored that the Protocol on Inland Water Transit and Trade (PIWT&T) which is one of the earliest instruments concluded between Bangladesh and India in 1972 is significantly contributing to bilateral trade between the two countries.

Dr. Momen also mentioned that the agreement on the use of Chattogram and Mongla ports for the movements of goods to and from India is another milestone of friendly relations between the two countries.

He also stated that by taking the advantage of its unique geographical location in the region, Bangladesh is offering itself as a gateway to landlocked Nepal, Bhutan and the north-eastern states of India and thus is promoting regional connectivity and integration as the key to collective and inclusive development.

During the Conference, the dignitaries including the Chief Minister of Assam and the envoy of Singapore to India commended the action taken by the  Prime Minister of Bangladesh Sheikh Hasina and her Government for exerting “zero tolerance” towards terrorism and insurgency which ultimately paved the way in establishing peace and stability of the entire South Asian region.

Later, he met the Governor of Assam Prof. Jagdish Mukhi at Raj Bhaban when they discussed the issues of mutual interest.

Both the dignitaries agreed that the relationship between Bangladesh and Assam is deeply rooted in the history and expressed satisfaction on the existing friendly ties.

Dr. Momen underscored the need to strengthen the age-old bond between the peoples of Bangladesh and Assam.

The foreign minister emphasized on promoting trade and business, people to people contact and tourism by taking advantage of the many shared commonalities.

He also underscored the necessity of establishing air and road connectivity to enhance the  people to people contact between Bangladesh and India and north-eastern region.

Foreign Minister also requested to establish a Foreign Regional Registration Office (FRRO) in Assam to ease the visa and consular related issues for the people of Bangladesh visiting Assam.

Dr. Momen also met the members of the business community in Assam in presence of the Minister of Commerce and Industries of Assam. CEOs of Business bodies and the President of Chambers of Commerce participated in the interactions.

Foreign Minister highlighted that Bangladesh with its exemplary economic achievements under the dynamic leadership of the Hon’ble Prime Minister Sheikh Hasina is contributing to the peace and prosperity region.

The Foreign Minister is expected to depart Guwahati for Bangladesh tomorrow after finishing his two-day visit to Assam, India.