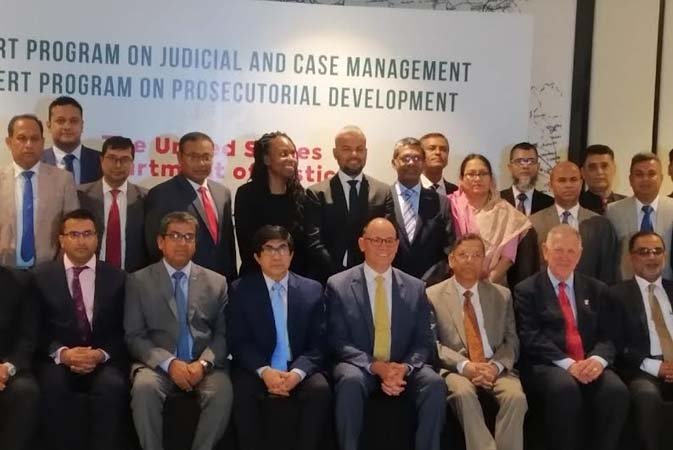 DHAKA, May 28, 2022 (BSS) - Law, Justice and Parliamentary Affairs Minister  Anisul Huq termed terrorism one of the biggest threats to democracy, peace and human security in the current world.

"Since terrorism is a global threat, every country in the globe should play an active role in combating the menace," he said.

The law minister made the remakes while speaking as the chief guest at the closing ceremony of the Expert Programme on Case Management and Prosecutorial Development at Le Meridien Hotel in the city, said a press release.

Judges and prosecutors from Bangladesh's Special Anti-Terrorism Tribunal took part in the six-month-long programme organized in the capital in collaboration with the US Department of Justice's OPDAT.

Anisul expressed deep shock and sorrow over the recent shooting that killed 21 people, including 19 innocent students, at a primary school in the US state of Texas and observed silence for some moments in memory of the victims.

Noting that the country has achieved remarkable success in curbing terrorism under the visionary leadership of Prime Minister Sheikh Hasina, he said Bangladesh's achievements in combating terrorism and extremism have been widely recognized and appreciated at home and abroad.

"The government of Prime Minister Sheikh Hasina enacted an anti-terrorism law in 2009 recognizing the preparation, assistance and instigation for terrorism as offense. It also enacted the Digital Security Act in 2018 to curb crime on virtual platforms," the minister added.

Under the both laws, seven special anti-terrorism tribunals and eight cyber tribunals have been set up across the country to ensure a fair and effective trial for terrorism and cyber crimes, Anisul said.

In order to protect the right of the people to justice even during the Covid-19 pandemic, virtual courts were set up at the directive of Prime Minister Sheikh Hasina by issuing the 'Ordinance for Usage of Information and Communication Technology by Court'.

Despite the epidemic situation, special anti-terrorism tribunals have disposed of a significant number of appeals, which have greatly contributed in tackling emergency problems and reduce the number of prisoners.