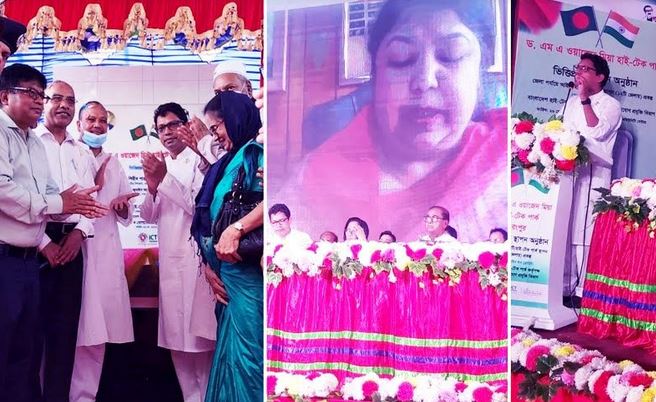 RANGPUR, May 26, 2022 (BSS) - Construction of Dr. M A Wazed Miah High-Tech
Park, Rangpur began today in the Kholishakuri area in the city fulfilling the
much-awaited hopes and aspirations of young generations of the region.

Jatiya Sangsad Speaker Dr. Shirin Sharmin Chaudhury, who was connected
virtually, with State Minister of the ICT Division Zunaid Ahmed Palak on the
spot, launched the construction by unveiling a plaque of the foundation
stone.

Speaking on the occasion, the Speaker thanked the ICT Division for
establishing Dr. MA Wazed Miah High-Tech Park in Rangpur.

After unveiling the plaque of the foundation stone and offering munajats
there, State Minister Zunaid Ahmed Palak termed the Hi-Tech Park as the
opportunity for the employment generation of young generations of the Rangpur
region.

"Dr. MA Wazed Miah Hi-Tech Park would make a significant contribution to
building a smart Bangladesh from a labour-dependent economy to a knowledge-
dependent developed economy," he said.

"After implementation of Dr. MA Wazed Miah Hi-Tech Park by June, 2024, direct
and indirect working scopes will be created for at least 5,000 young start-
ups, IT professionals and entrepreneurs," he added.

On the occasion, the State Minister distributed made-in-Bangladesh 'WALTON'
laptops to 54 freelancers as gifts from Prime Minister Sheikh Hasina for
their maximum earnings after completion of training under the Learning and
Earning Development Project (LEDP).

Zunaid Ahmed Palak also visited different stalls set up in the same venue by
some 20 most successful freelancers and entrepreneurs on the 'Chari Mela'
(Job Fair) premises organized by HyperTag with the assistance of the LEDP.

The Speaker said, "We are very happy that the foundation stone of Dr. MA
Wazed Miah Hi-Tech Park is being laid in Rangpur paving the opportunity for
Rangpur people to contribute to the country's IT industry."

There is no alternative for young people to pursue technical education in
this age of high competition.

"We want to build a technology-based nation. Rangpur has always been a
neglected area, it has never been industrialized. The government is working
tirelessly for the development of the Rangpur people," she said.

Dr. MA Wazed Miah Hi-Tech Park has created an opportunity for male and female
youths to stand on their feet. This park will create employment
opportunities.

"In his educational life, Dr. Wazed became associated with Bangladesh Chhatra
League in the sixties. He was arrested in 1962 while protesting against Ayub
Khan's military rule and spent some time in jail," he said.

Dr. MA Wazed Miah has served in various capacities including Chairman of the
Bangladesh Atomic Energy Commission. The scope of his research work was
extensive.

"Dr. MA Wazed Miah lived not just for his work, but for building a science-
minded nation. That is why we have named the High-Tech Park after this
brilliant son of Rangpur," he said.

He said Prime Minister Sheikh Hasina always realizes the pledges and dreams
she presents before people.

Palak discussed the enormous benefits of Digital Bangladesh built as a result
of the relentless efforts, direction and supervision of Sajeeb Wazed Joy
during the last 13 years.

"Following the implementation of Digital Bangladesh, we successfully managed
Covid-19 pandemic, education through online classes, activities of the
judiciary, administrations, offices, educational and other institutions and
every sector," he said.