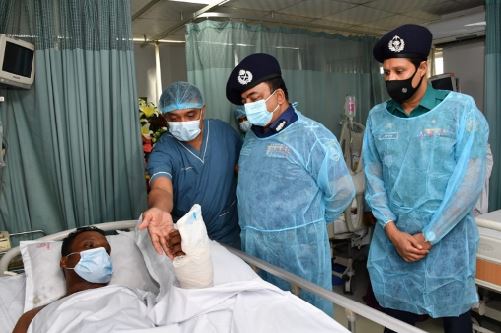 DHAKA, May 23, 2022 (BSS) - Inspector General of Police (IGP) Dr Benazir Ahmed today said that police carry out their responsibilities at the highest risk to keep the country and people safe.

"In spite of being careful accidents occurred often. We have lost many of our colleagues in such accidents while performing duties every year," he told journalists after visiting the ailing constable Md Jony Khan at a city hospital.

Dr Benazir visited Jony Khan and enquired about his treatment. Jony Khan lost his wrist while performing duty to arrest an accused at Lohagora thana area on May 15.

"Doctors successfully replaced the wrist of our colleague after nine hours operation," the IGP said.

He expressed his sincere gratitude to the doctors, nurses, staff and hospital authorities for conducting such a complex operation.