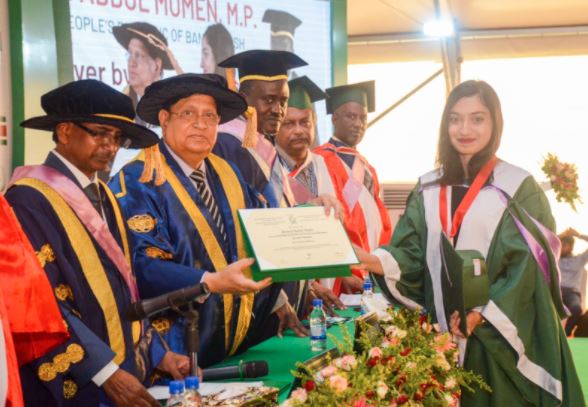 DHAKA, May 23, 2022 (BSS) - Foreign Minister Dr. AK Abdul Momen today called
upon the IUT graduates to take inspiration from the glorious past of the
Muslim Ummah and work relentlessly for socio-economic development of mankind.

"Let the world know that Muslims can still carry the torch of knowledge," he
said.

The foreign minister was speaking as chief guest at the 34th Convocation of
Islamic University of Technology (IUT) on its campus in Gazipur.

The main objective of IUT, run and funded by the Organisation of Islamic
Cooperation (OIC), is to contribute to developing the human resources of the
member states of the OIC, particularly in the fields of engineering,
technology and technical education.

"We are not the terrorist and the fanatics that the wave of Islamophobia has
recently depicted us through its media," he said pointing some western media
outlets.

He urged the new generation of Muslim ummah to create an international media
of repute and objectively unlike the "current partisan and narrowly focused
ones".

Dr. Momen recalled with gratitude the Father of the Nation, Bangabandhu
Sheikh Mujibur Rahman, under whose visionary leadership Bangladesh joined the
OIC in 1974.

He congratulated the IUT authority for successful completion of their
academic year despite coronavirus pandemic, and reiterated Government of
Bangladesh's continued cooperation and support to IUT.

Foreign Minister handed over certificates to the doctorate students, and OIC
and IUT gold medal to students who have excelled in their respective fields.