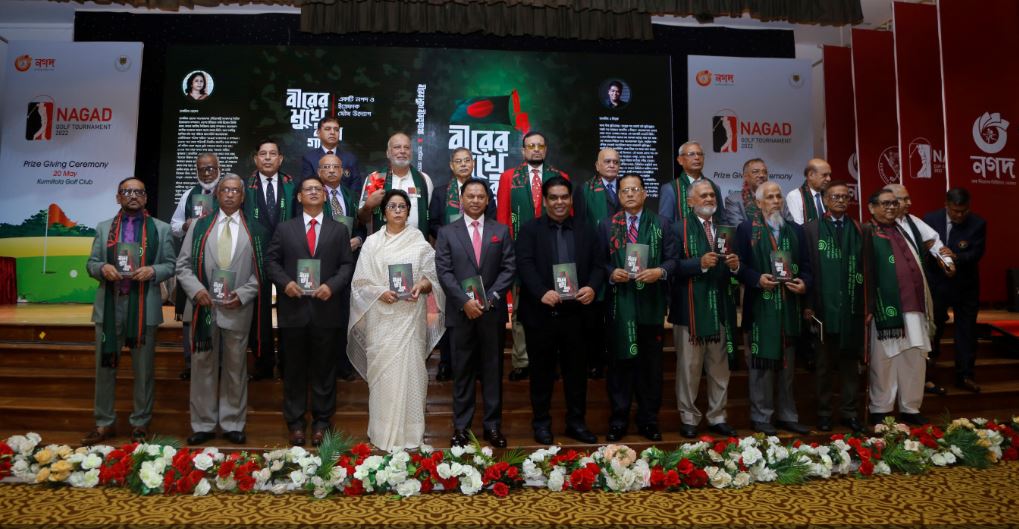 DHAKA, May 21, 2022 (BSS) - To commemorate the contributions of the heroic freedom fighters of the country, Chief of Army Staff General S M Shafiuddin Ahmed has recently unveiled a book titled "Beerer Mukhe Birottogatha", which contains interviews of 25 courageous freedom fighters from the Armed Forces.

The book unveiling function was also joined by Founder and Managing Director of Nagad Ltd Tanvir A Mishuk and Editor of the Daily Ittefaq Tasmima Hossain at the Kurmitola Golf Club in Dhaka Cantonment on Friday evening, said a press release.

'Beerer Mukhe Birottogatha', edited by Tanvir A Mishuk and Tasmima Hossain, is a collection of interviews of 25 eminent freedom fighters who fought for the country in 1971 risking their lives.

Senior officials for the Bangladesh Army, Nagad Ltd, and members of the Kurmitola Golf Club were present on the occasion.

Chief of the Army Staff General S M Shafiuddin Ahmed also handed over the prizes to the winners of three-day-long Nagad Golf Tournament 2022.

The country commemorates the contributions of individuals from all walks during the glorious Liberation War of Bangladesh with utmost respect and gratitude.

To pay tribute to the war heroes, the daily Ittefaq featured 25 freedom fighters from the armed forces and published their interviews during the month of independence in March 2022. Later, Nagad and Ittefaq jointly took the initiative to publish the book compiling the interviews.

The Managing Director of Nagad Tanvir A Mishuk said, "As a son of a freedom fighter, I am truly thrilled to be here on such a great occasion. I have always been fascinated by the history of our great liberation war. Our heroic freedom fighters battled with unparalleled bravery and risked their lives to give us an independent country. I pay my humble tribute to the martyrs of the great Liberation War as well as the living armed force and civil freedom fighters."