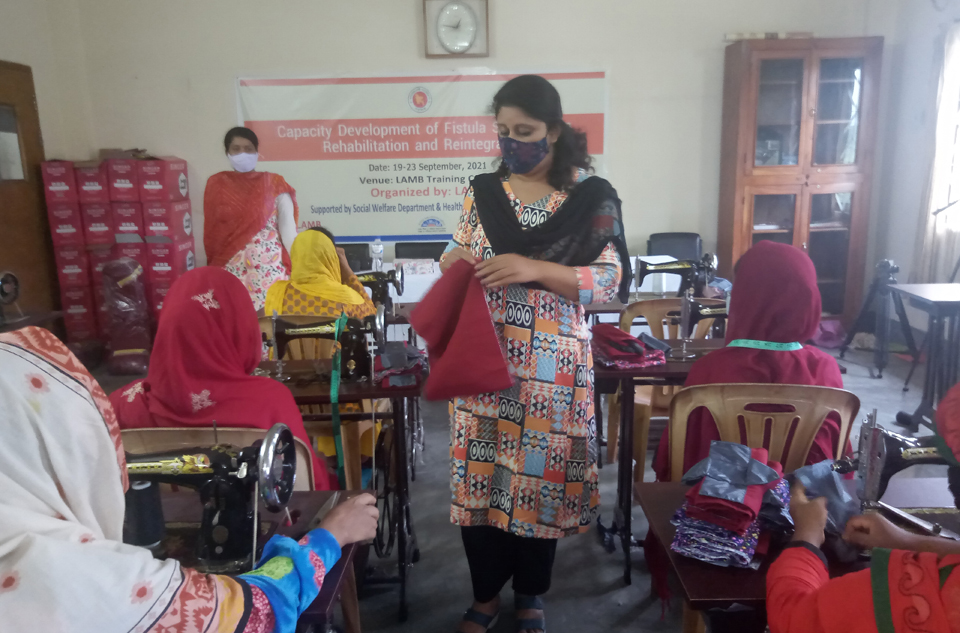 RAJSHAHI, May 21, 2022 (BSS)- Aleya Begum, 63, a resident of Ratankandi village under Shahjadpur upazila in Sirajganj district, is now physically and mentally fit for the last couple of months after eliminating her 25-year pains caused by obstetric fistula.

In 1996, she was diagnosed with a fistula during a caesarean delivery at a local hospital while giving birth to her eighth baby. Aleya, wife of Md Fatique, did not feel any urgency to urinate and has had constant urination through vagina.

The couple went to different hospitals and clinics repeatedly but did not get any remedy from the chronic disease frustrating them badly. At last, Aleya underwent fistula surgery at Lamb Hospital on February 28, 2021.

She availed proper treatment facility in the hospital free of cost. Now, she is cured from fistula and gained a new life through surgery that also strengthened her level of confidence.

Ishrat Jahan, 39, a resident of Gulta village in Tarash upazila of the same district, had been suffering a lot due to chronic urination since removal of her uterine tumour at a clinic in Bogra's Sherpur in early 2020. She again sought medical attention but the clinic authority didn't pay heed to her request. Jahan also got relief from her pain after availing a fistula operation in the Lamb hospital on December 2, 2020. Begum and Jahan, among many others, were rehabilitated after surgery and training on income-generating activities at the Lamb Hospital.

They have returned back to their normal life from their long-lasting sufferings after getting the support on behalf of a project titled "Elimination of Genital Fistula by Capturing, Treating, Rehabilitating and Reintegrating in Bangladesh (FRRei)".

"We are giving main focus on identifying cases from the community, referral for diagnosis, timely management, motivation, counseling, follow up and comprehensive rehabilitation and reintegration to free the society from obstetric fistula by 2030," said Mahatab Liton, Manager of the project.

He added that the project is being implemented in different districts, including Rajshahi, Bogra and Sirajganj, of the region with the main thrust of reducing the prevalence of fistula side by side with facilitating the patients to get normal life.

In 2021, 96 patients were rehabilitated after surgery and training on income-generating activities at the Lamb Hospital under the project being implemented supported by UNFPA Bangladesh. On behalf of the project, 20 fistula survivors get sanitary pad making training, 20 sewing machines and 11 others cattle for income generation making them pleasant.

Dr Nazmunnahar Tara, assistant professor at the department of gynecology and obstetrics of Rajshahi Medical College and Hospital said they are attending fistula patients, who are being victimized by unsafe caesarean operation, and working to give them back to normal life through surgery.

Obstetric fistula is one of the most devastating pregnancy-related morbidity, mostly affecting women from marginalized socio-economic backgrounds. It leaves women with incontinence problems, and often leads to chronic medical problems, depression, social isolation and deepening poverty. However, this problem is preventable with the correct medical assistance and its occurrence is a violation of human rights and a reminder of gross inequities.

She, however, said obstetric fistula patients are getting back to their normal lives thanks to the availability of various rehabilitation services. So, utmost efforts are being given on bringing them under rehabilitation, Dr Tara said.

Giving a salient feature of their activities, Ruhul Amin, district coordinator of the project, said all the line departments, including health, family planning, women affairs and social development, are being sensitized to detect the fistula patients for their proper rehabilitation.