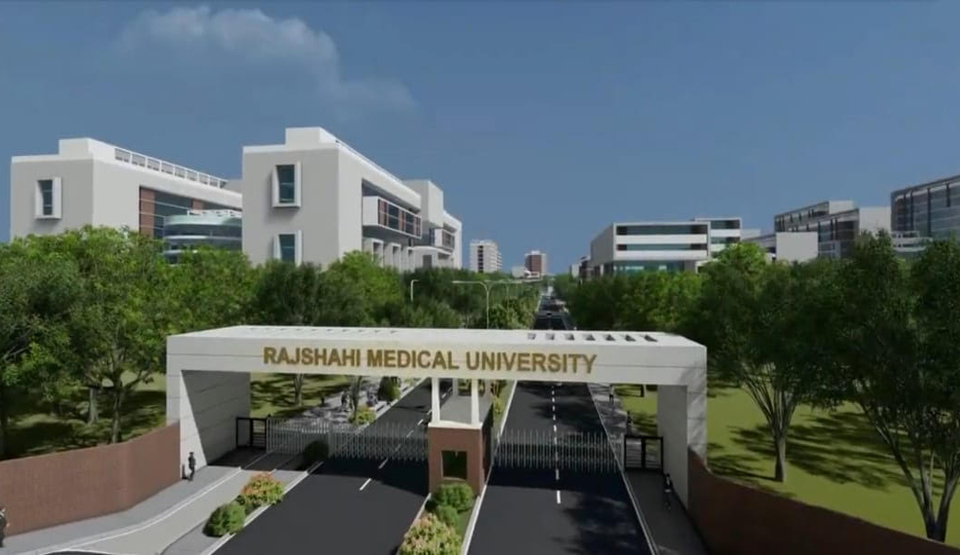 RAJSHAHI, May 20, 2022 (BSS)- Rajshahi Medical University (RMU) has adopted a Taka 3,100-crore project aimed at building it as a unique institution for expanding medical education and research in the northwest and southern parts of the country.

Vice-chancellor Prof Dr AZM Mustaque Hossain said RMU will have a 1,200-bed hospital in order to take healthcare activities forward side by side with medical education and research. The RMU, long-cherished by people of the region, will become visible within the near future.

The project will be implemented on 68 acres of land in two phases. In the Taka 2,000-crore first phase, academic buildings, administrative building, hospital, school building and day-care-centre will be constructed.

Area of healthcare will be enhanced to a greater extent in the 1,200-bed specialized hospital which will play a pioneering role in the treatment field of chronic diseases.

VC Prof Hossaid said they are expecting that the project will be approved within this month. Subsequently, the infrastructure development works will start.

Around 12,000 students are being admitted to 80 medical, nursing, dental colleges and other institutions under RMU's jurisdiction every year as its registrar office has been implementing all the scheduled works competently.

The RMU has been conducting MBBS, BDS, BSc in Nursing, BSc in Physiotherapy and Bachelor of Unani Medicine and Surgery (BUMS) courses since the 2017-18 academic session successfully.

He added that all the existing public and private medical colleges, dental colleges, nursing colleges and institute of health technology in Rajshahi, Rangpur and Khulna divisions were brought under the jurisdiction of RMU.

Meanwhile, the RMU has started playing a vital role in expanding medical education in the region by arranging competent and devoted workforces as it has already achieved academic excellence to a greater extent.

Examiners, invigilators and other staff concerned are highly satisfied as they were given payments of their long-lasting dues by dint of experienced leadership in accounts section as college inspection related works were also updated.

As the new university, Prof Hossain said utmost emphasis was given on appointing experienced and competent persons in different vital posts to run all the administrative and academic activities smoothly.

In terms of contractual appointments, transparency and accountability were fully ensured and as a result of contractual recruitments, dynamism has been infused into operational activities of the university, he added.

Apart from this, appointments were made in line with the decision of syndicate and allocation along with following the approved rules of the university grants commission in this regard.

They have already formulated a draft project proposal (DPP) and sent it to the Planning Commission for approval in ECNEC, categorically saying they are carrying out the examination activities accurately.

Even the academic activities were not hampered significantly during the period of Covid-19 pandemic, he added.

As a result of experienced and competent leadership in the office of controller of examinations, the RMU has advanced by around one year compared to the contemporary universities.

Prof Hossain vowed to build the medical university as a center of excellence in medical education and research.

A competent and experienced administration has been formed with the committed teachers and professionals for operating administrative and academic activities successfully, he said.

This is the high time to generate skilled and competent workforces in the health sector to cope with the Covid-19 like pandemic situations, he went on saying.

A site of 68 acres of land in Shilinda area of Rajshahi city has been selected for establishing its own campus of the university.

A nursing institute will also be established on the campus for creating skilled nurses, Prof Hossain said.

All activities including data entry, students' registration and form fill-up for examination are being executed digitally through rmu.edu.bd website from anywhere and anytime.

Apart from this, the RMU is taking examinations in coding and decoding methods since its very beginning for the first time in the country.

"We have plans of launching post-graduation courses, including PhD, under the existing eight faculties of the university as soon as possible." Prof Hossain added.