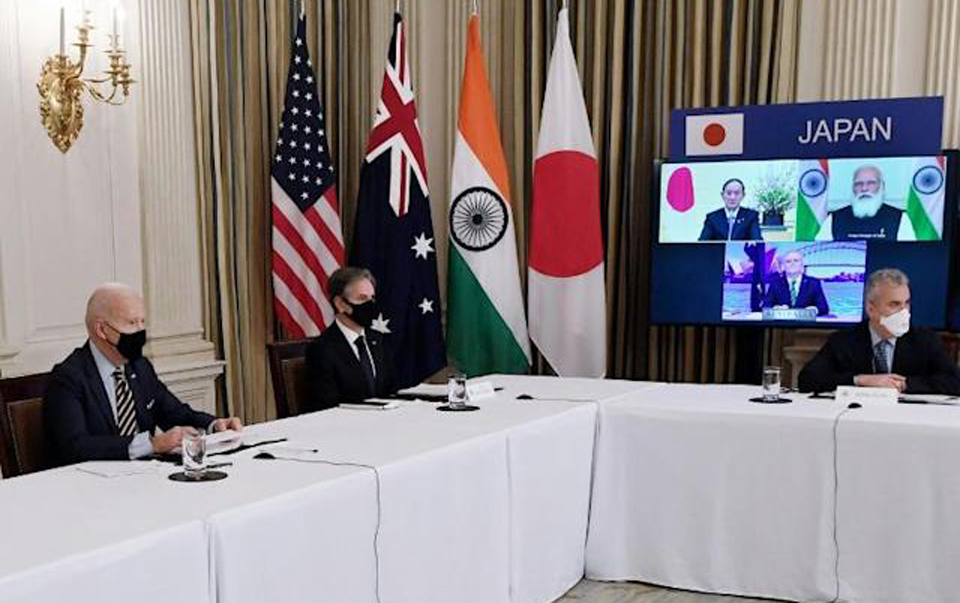 TOKYO, May 20, 2022 (AFP) - The leaders of Japan, India, Australia and the United States meet in Tokyo next week seeking common ground on countering China, despite differences over Russia's invasion of Ukraine.

The loosely organised "Quad" grouping is united by its desire for a counterweight to China's expanding economic, military and technological influence.

But it is divided on Ukraine, with India the only member not to have explicitly criticised or imposed sanctions on Moscow, instead increasing its imports of Russian oil.

Many observers are convinced that Beijing is eyeing the international response to the war in Ukraine as it considers its options for "reunifying" Taiwan with the mainland.

Quad leaders "will be talking about ways they can increase deterrence and military cooperation" concerning China, said Robert Dujarric, co-director of Institute of Contemporary Asian Studies at Temple University.

The May 24 forum "will show Beijing that they are working together to contain, to deter, against China," he told AFP.

US President Joe Biden will be in Japan for the first time since taking office and is expected to use bilateral talks with Japanese Prime Minister Fumio Kishida to hammer home concerns about Beijing.

Reports suggest the pair will issue a joint statement warning they are ready to "respond" to actions by China that undermine regional stability.

But the tone of any Quad statement is likely to be softer, echoing past calls for a "free and open Indo-Pacific" and warnings against "unilateral" moves in the region -- without directly naming China.

The mood is already tense, and the entire summit could yet be overshadowed by North Korea, which is believed to be preparing fresh missile launches or even a nuclear test.

Elsewhere, Japan has regularly raised concern about increasing Chinese patrols around disputed islands and there is growing talk about how the United States and allies should respond to threats to Taiwan.

Japan's foreign minister this week held his first talks with his Chinese counterpart in six months, calling on Beijing to play "a responsible role" internationally and warning that public opinion in Japan is "extremely severe to China."

Beijing's rhetoric has been sharp, with warnings that reports "the US and Japan would join forces against China" were "clouding the air."

China's top diplomat Yang Jiechi also explicitly put Washington on notice over Taiwan, saying if it "goes further and further down the wrong road, it will certainly lead the situation to a dangerous point."

Washington has appeared to be trying to tamp down tensions, with National Security Advisor Jake Sullivan insisting Biden's focus was "not a negative message and it's not targeted at any one country."

Biden and Kishida, along with Indian Prime Minister Narendra Modi and the winner of Australia's May 21 elections, are seeking to find common ground on economic cooperation, including fixing supply chain disruptions and securing semiconductor supplies.

The United States will unveil its Indo-Pacific Economic Framework, a new economic grouping seen as a bid by Washington to build supply chains without China.

It comes after Washington under then-president Donald Trump abruptly pulled out of the Trans-Pacific Partnership that groups countries surrounding China.

But behind the common front will be lingering differences with India on Ukraine.

"The difference of attitudes over the Ukraine war have prompted a question in the minds of the United States and Europe as to whether India is a nation that shares the same values," said Michito Tsuruoka, an associate professor at Keio University who studies defence issues and European politics.

"The Quad started as a security framework, but now we are seeing more of an economic agenda" partly due to difficulties with India on defence subjects, he added.

And the summit is unlikely to change that, said Jitendra Nath Mishra, a former ambassador and adjunct professor at O.P. Jindal Global University.

Washington and its allies "have shown understanding of India's need to protect its strategic and military ties with Russia to develop China-facing capabilities," he said.

"Pressurising India does not advance the West's need to build a coalition to counter an aggressive China."