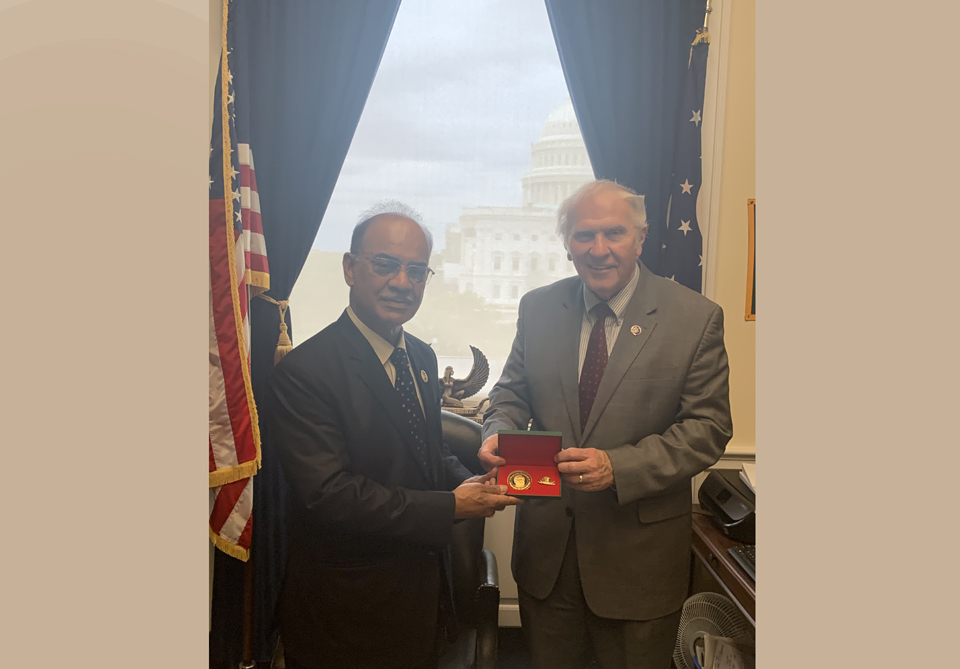 They said this while having meetings with a four-member delegation from the Standing Committee on the Ministry of Foreign Affairs of Bangladesh National Parliament led by its Chairman Muhammad Faruk Khan on Wednesday in Washington DC.

Other members of the team were Nurul Islam Nahid, Nahim Razzak, and Kazi Nabil Ahmed while the meetings took place at the respective offices of the Senator and the Congressman at Capitol Hill, said a press release received here today.

Bangladesh Ambassador to the United States M Shahidul Islam and Embassy officials were present in the meetings.

During the meetings, the Parliamentary delegation briefed the US lawmakers on Bangladesh's impressive socio-economic development that has taken place under the able leadership of Prime Minister Sheikh Hasina.

The Bangladeshi lawmakers acknowledged US humanitarian and political support to cope with more than 1 million displaced Rohingyas sheltered in Bangladesh.

They also requested the US lawmakers to persuade Myanmar in all possible ways to create a safe environment in Rakhine State to ensure safe and voluntary return of Rohingyas to their homeland in Myanmar.

The US lawmakers commended Bangladesh's generosity in hosting this huge number of Rohingyas and said that they would continue their efforts to address the Rohingya issue.

The Bangladesh delegation also appreciated the US government's donation of 64 million doses of COVID-19 vaccines to Dhaka.

The Parliamentary delegation conveyed the urge of Prime Minister Sheikh Hasina for enhanced US investment in diversified sectors in business-friendly Bangladesh.

Referring to the attainment of 100% electricity coverage in Bangladesh, Faruk Khan appreciated the role of Texas-based US energy companies for their contribution in this regard.

Both sides underscored the importance of further expansion of trade and investment cooperation and deepening of the multifaceted partnership in the coming days.

In this regard, he mentioned that the United States, in particular the State of Texas, was eager to engage more with Bangladesh for cooperation in the energy sector.

Deportation of Rashed Chowdhury and sanctions on RAB

The delegation reiterated Bangladesh's request for the deportation of Rashed Chowdhury, the self-confessed killer of Father of the Nation Bangabandhu Sheikh Mujibur Rahman.

They also sought the US lawmakers' support for lifting US sanctions on the RAB, which is making tremendous contributions to the fight against extremism, terrorism, and cross-border crimes, including drugs and human trafficking.

The Parliamentary team sought the support of Congressman Chabot to revitalize the Congressional Bangladesh Caucus.

Congressman Steve Chabot, the Ranking Member of the influential US House Foreign Affairs Subcommittee on Asia, expressed his readiness to lead the proposed caucus as Co-Chair of the Congressional Bangladesh Caucus.

He said the Caucus would help in improving further the existing friendly relationship between Bangladesh and the United States.

The Parliamentary delegation is also scheduled to meet tomorrow with Congressman Dwight Evans (Democrat-Pennsylvania) and discuss issues of mutual interest between Bangladesh and the United States.