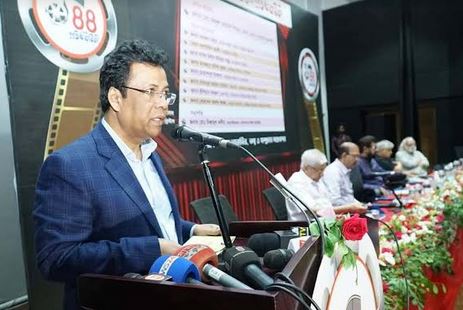 DHAKA, May 17, 2022 (BSS) - Information and Broadcasting Secretary Md Mokbul Hossain today said Bangladesh Film Archive (BFA) is playing a unique role in keeping the struggling life and works of Father of the Nation Bangabandhu Sheikh Mujibur Rahman and the real history of the Liberation War alive among the new generation.

He stated this while addressing a discussion organized by BFA marking its 44th founding anniversary at its auditorium in city's Agargaon.

Mokbul said film is a reflection of time and the role of the film archive is pivotal as the future generation can know about the lifestyles of their previous generation.

Earlier, a colourful rally was held.

In the discussion, the discussants expressed their gratitude to Prime Minister Sheikh Hasina for building a world class film archive.

The premier laid foundation of the modern film archive building on February 27, 2013 and it was inaugurated on November 1, 2018.