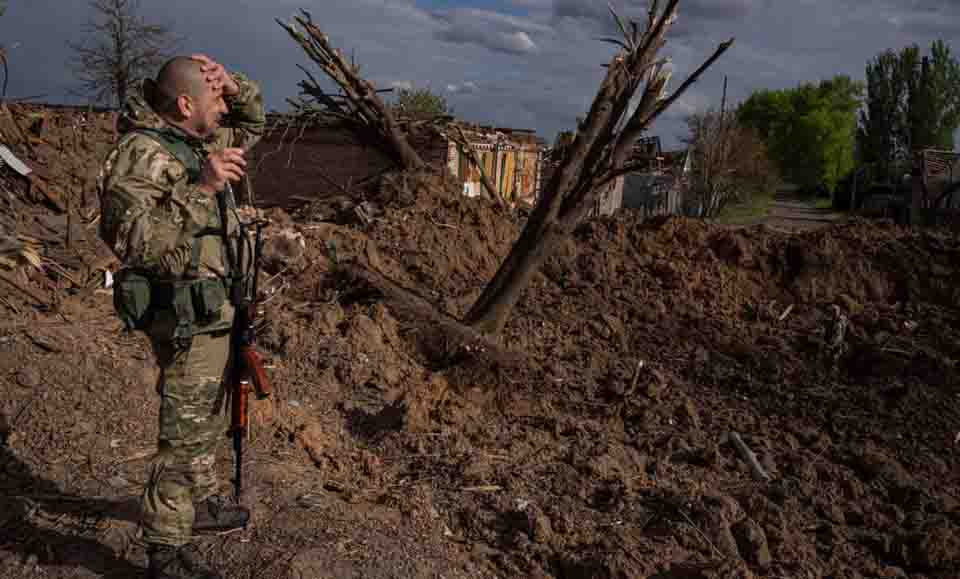 KYIV, Ukraine, May 14, 2022 (BSS/AFP) - Intense fighting raged in eastern Ukraine's Donbas region where Russia has been concentrating its forces without making significant progress, while "very difficult negotiations" were under way over the fate of the last besieged defenders in the city of Mariupol.

Europe on Friday pledged another half a billion dollars in military support for Ukraine as it resists the Russian invasion that began on February 24, while Sweden and Finland's moves towards joining NATO hit multiple obstacles.

At the end of March, after failing to take the capital Kyiv in the face of determined resistance, Russia turned its focus to eastern Ukraine.

"There's heavy fighting on the border with Donetsk region, from the side of Popasna," Gaidai said, reporting heavy losses of equipment and personnel by the Russians.

"From interceptions (phone calls), we understand that a whole (Russian) battalion has refused to attack, because they see what's happening."
Aerial images showed dozens of destroyed armoured vehicles on the river bank and wrecked pontoon bridges.

"Conducting river crossings in a contested environment is a highly risky manoeuvre and speaks to the pressure the Russian commanders are under to make progress in their operations in eastern Ukraine," it said.

The ministry added that Russian forces had "failed to make any significant advances despite concentrating forces in this area".

A senior US defence official said most of the activity was now in the Donbas area, "and essentially, we continue to see the Russians not making any major gains" there.

According to the latest assessment from the US-based Institute for the Study of War, "Russian President Vladimir Putin likely intends to annex occupied southern and eastern Ukraine directly... in the coming months."

Russia's hopes of swift gains appear to have been thwarted and Ukraine has even managed to push Russian troops out of the northern city of Kharkiv, which had been a priority target for Moscow.

In Kharkiv region, "the enemy's main efforts are focused on ensuring the withdrawal of its units from the city of Kharkiv," said the spokesman for the Ukrainian General Staff.

"The gradual liberation of the Kharkiv region proves that we will not leave anyone to the enemy," Ukrainian President Volodymyr Zelensky said in his daily video address Friday.

"Of course, we remember every city and every community that is still under occupation," he said, with a special mention of the southern port city of Mariupol where the last defenders are holed up in the vast Azovstal steelworks.

"We do not stop trying to save all our people from Mariupol and Azovstal," Zelensky said.

"Currently, very difficult negotiations are under way on the next stage of the evacuation mission -- the rescue of the seriously wounded, medics. It is a large number of people."

Women, children and the elderly who had taken refuge in the tunnels and bunkers in the Azovstal plant were evacuated at the end of April with the help of the United Nations and Red Cross.

The Ukrainian General Staff said in an update Saturday that Russian forces continued "to blockade our units near the Azovstal plant" and carried out "massive artillery and air strikes".

From inside the plant, Sviatoslav Palamar, one of the leaders of the Ukrainian Azov regiment, told the online Kyiv Security Forum that there were 600 wounded there and pleaded for help to evacuate them.

"We continue to defend ourselves, and we shall not surrender," he said.

The meeting of G7 ministers, joined by their Ukrainian and Moldovan counterparts, continues Saturday.

An informal meeting of NATO foreign ministers is also scheduled in Berlin on Saturday, where the Swedish and Finnish ministers plan to meet their Turkish counterpart to discuss their potential bids to join the alliance.
That follows Turkish President Recep Tayyip Erdogan expressed opposition to their entry.

The White House said it was "working to clarify" Erdogan's stance on the issue.

Every NATO member's approval is required to expand the alliance.
And a day after leaders in Helsinki declared their nation must apply to join NATO "without delay", Russian state energy group Inter RAO said it would suspend electricity supplies to Finland beginning Saturday.

Inter RAO's subsidiary in the Nordic region blamed the suspension on not having received payment for electricity sold in May.

Russia had warned that it would be forced to take "reciprocal steps" if Finland joined NATO, to "address the resulting threats".