Elgar, Bavuma power South Africa to 233-4 on day 1 against Tigers 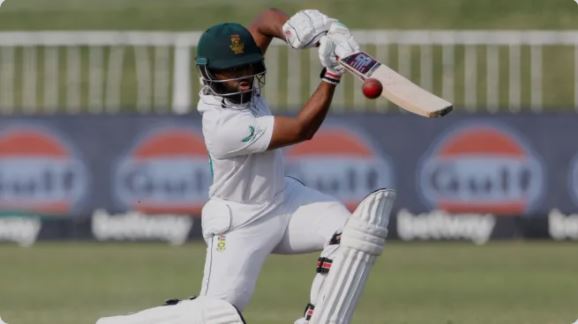 DHAKA, March 31, 2022 (BSS) - South Africa reached 233-4 on day one of the first Test against Bangladesh, thanks to half-century from captain Dean Elgar and vice-captain Temba Bavuma at the Kingsmead Cricket Ground in Durban today.

Elgar gave the side a dominating start and Bavuma carried the side towards safety before badlight brought an early end to the day.

Elgar was the top-scorer of the day for the hosts with 67. Bavuma however was batting on 53, hitting his 18th fifty in 50th Test with Kyle Verreynne on 27.

The day began after 35-minute delay due to the sightscreen issue but South African who were asked to bat first, looked happier side to bat on.
They came down heavily on Bangladeshi bowlers, who also helped the hosts' cause by bowling down the leg side more often.

Bangladesh bowlers in fact failed to create any chance for most part of the first session. The only chance came in the last over in the morning session when offspinner Mehidy Hasan Miraz's extra bounce baffled opener Sarel Erwee who top-edged one but wicket-keeper Liton Das failed to grab the catch.

After South Africa reached 95-0 in the morning session, Bangladesh hit back in the match in the second session by taking three wickets including of captain Dean Elgar.

Elgar and Erwee shared 113-run for the opening stand before fast bowler Khaled Ahmed undid Elagar with a delivery that carried extra bounce. Elgar clobbered 11 fours for his 67 off 101.

Offspinner Mehidy Hasan Miraz then struck in the next over, taking out Erwee for 41. The session brought more joy for Bangladesh when Miraz trapped Keegan Petersen run out for 19 with a direct hit from point.

Pacer Ebadot Hossain gave Bangladesh another breakthrough in the last session when he had debutant Ryan Rickelton caught by captain Mominul Haque for 21.

But Bavuma and Verreynne resisted and kept the side unscathed, sharing 53-run for the undefeated fifth wicket.

Bangladesh came to play the Test high on confidence after clinching their first ever ODI series victory on South African soil by 2-1.