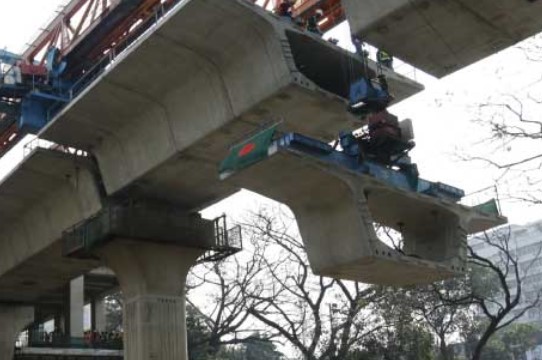 The installation of all viaducts of the much waited metro rail was completed at around 11 am with setting up the last one between pier no-582 and pier no-583 in front of the Jatiya Press Club, MAN Siddique, managing director of Dhaka Mass Transit Company Limited said.

Formally known as the Mass Rapid Transit Line 6 or MRT Line-6, the elevated rail line is being constructed between Dhaka's Uttara Sector-3 and Motijheel.

Earlier on August 1, 2017, the implementation agency started installing the viaduct for the rail project. Within April this year they were scheduled to clean the occupied roads under the project areas, he also said.

According to the project details, the overall construction progress stands at 70.04 percent, while the physical progress of the first phase construction of the metro-rail from Uttara to Agargaon is 90.08 percent.

It said the second phase of physical construction work from Agargaon to Motijheel reached to 73.08 percent, while combined progress of electrical and mechanical system and procurement of rolling stock (rail coaches) and depot equipment is 70.91 percent.

The managing director said that construction of all metro stations is going on in full swing during the coronavirus pandemic maintaining strict health guidelines.

He said if the current pace of work is continuing by following safety rules during the ongoing coronavirus situation, the rail project might be completed in time.

The first set of metro train will go for a trial run on viaducts and after successful completion of the performance and integrated tests.

Initially, the length of the metro rail route up to Motijheel was 20.10km. It was later extended to Kamalapur Railway Station adding 1.16 km. As a result, the number of stations was also increased to 16, it said.

The metro rail is projected to carry 60,000 passengers per hour by travelling the entire route of 21.26km from Uttara to Motijheel-Kamalapur Railway Station in less than 40 minutes, it said.

Besides, construction of entry and exit structure is going on as per the target of commercial operation of the much awaited metro rail.