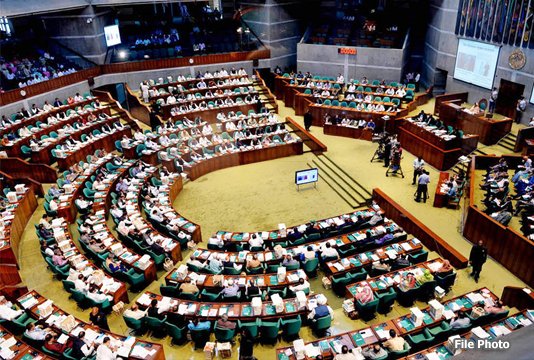 Chairman of the parliamentary standing committee on the Ministry of Law,Justice and Parliamentary Affairs Shahiduzzaman Sarker ofNaogaon-2 placed the report in the House with Speaker Dr Shirin Shrmin Chaudhury in the chair.

The parliamentary standing committee recommended the parliament to adopt the bill in the ongoing session.

According to Article 118 (1) of the Constitution, the bill will give a legal shield to the appointments of the Chief Election Commission and elections commissioners to form the EC.

The proposed legislature is likely to be passed in the ongoing session of parliament and new election commissioners will be appointed in line with the new law.

The tenure of the incumbent KM Nurul Huda led election commission will expire on Feb 14.

The cabinet approved the draft of appointing CEC and other election commissioners on January 17—the day the ruling Awami League led by Prime Minister Sheikh Hasina held dialogue with President Abdul Hamid at the Bangabhaban on formation of the next EC.

Placing the bill, the law minister said the bill has been proposed to form a six-member search committee for recommending the names of qualified persons who will be eligible for appointment of the CEC and ECs under the commission.