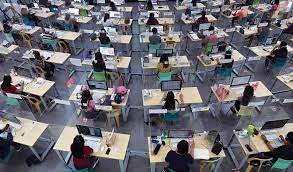 MANILA, Jan 14, 2022 (BSS/AFP) - Schools in the Philippine capital Manila
were ordered Friday to suspend online classes for a week, as an Omicron-
driven record surge in infections ravages the metropolis of 13 million.

Covid-19 is ripping through the national capital region and surrounding
provinces, causing widespread disruption to businesses, services and
healthcare providers.

The order for schools in the capital to suspend online lessons until
January 22 was to "ease the health burden" for teachers and students, the
regional Department of Education said in a memorandum.

Thousands of teachers and students have been infected with Covid-19,
according to the Alliance of Concerned Teachers, which has welcomed the
"health break".

In an apparent effort to limit the havoc caused by Omicron and get people
back to work faster, the government has also shortened the isolation period
for people with mild symptoms of the disease from 10 to seven days.

The move to pause lessons comes days after the national Department of
Education gave schools across the archipelago the option to suspend classes
for two weeks this month as Omicron whips across the nation.

Only around half of the Philippine population is fully vaccinated.

While nearly every country in the world has partially or fully reopened
schools for face-to-face lessons, the Philippines has kept them largely
closed since March 2020.

A pilot return of some schools to in-person lessons in November was
suspended in December as infections rose.

The number of new cases hit a record 37,207 on Friday, with more than
three million people in the country infected since the start of the pandemic.

But a lack of testing and the exclusion of antigen results from the tally
means the actual figure is likely much higher.

To revive the battered economy, the government loosened lockdowns in
October last year, after coronavirus infections driven by the Delta variant
peaked.

New infection numbers dwindled to a few hundred per day just before
Christmas, but ramped up again as people gathered over the holidays.