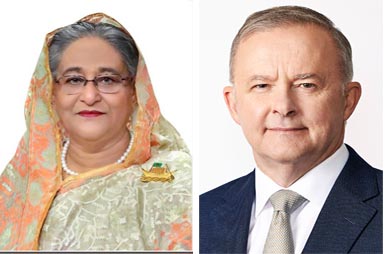 In a felicitation letter addressing the Australian leader, she said, "I, on behalf of the Government and the people of Bangladesh, and on my own behalf extended heartiest congratulations to Leader of the Australian Labor Party Anthony Norman Albanese, on his Party's victory in the Federal elections."

The prime minister expressed her deep trust mentioning that the victory manifested the Australian people's confidence in the party under Anthony Norman Albanese's stewardship to lead the country towards inclusiveness, peace, and prosperity, said an official release of Prime Minister's Office (PMO) Press Wing.

Sheikh Hasina reiterated, "Our relations have deepened, and the ties have become more robust with time through increasing cooperation in diverse areas of trade, economy, culture, and education. We have immense potential for cooperation in clean energy, maritime security, ocean governance, and blue economy."

As the two countries observe 50 years of friendship, she said, "We shall explore newer areas of mutual interests, complementarities, and interdependence so that our relations may elevate to that of the key partnership."

The two countries can together promote peace and stability in the Indian Ocean region and protect rules-based international order, she said.

The premier added, "I sincerely hope you will visit our country at your earliest convenience to appreciate the strengths of a resurgent Bangladesh as the second Australian Prime Minister after Prime Minister Gough Whitlam, who visited Bangladesh way back in 1975."

Such a high-level interaction will further cement the existing bonds of two countries friendship and help forge a common understanding of matters of bilateral interests and contemporary regional and global issues, she continued.