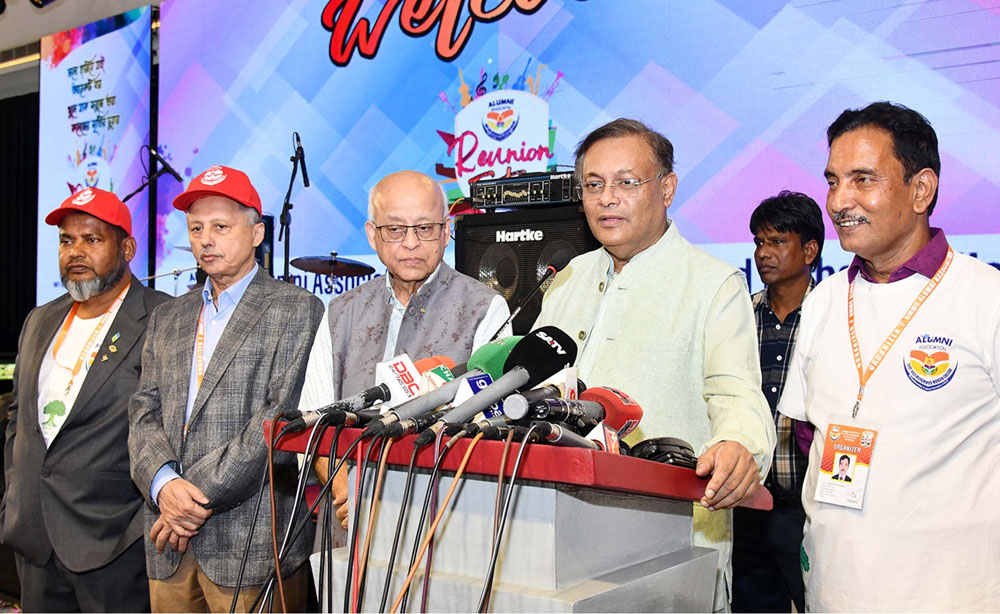 CHATTOGRAM, Dec 2, 2022 (BSS) - Terming Begum Khaleda Zia as a convicted accused, Information and Broadcasting minister Dr. Hasan Mahmud said she resided at home outside the prison by the kindness of Bangabandhu's daughter.

Hasan, also Joint General Secretary of Bangladesh Awami League, said the discussion of whether or not Begum Khaleda Zia goes to BNP's public meeting on December 10 is unrealistic.

`Khaleda Zia changed her date of birth and cut the birthday cake on the day the Father of the Nation Bangabandhu was killed. However, she is residing in her house outside the prison by the kindness of Prime Minister Bangabandhu's daughter Sheikh Hasina. Now if they think like that then the government will be forced to send him to jail’- he added.

The Information Minister said these in response to queries of the journalists after delivering speech as the chief guest at the reunion of Government Haji Mohammad Mohsin College, a traditional educational institution of Chattogram.

Dr Hasan said, the second reason is that Father of the Nation Bangabandhu Sheikh Mujibur Rahman called for independence in Suhrawardy Udyan, in fact declared independence.

`And that's the place where the Pakistani army surrendered. BNP is Pakistan's friend, their secretary general said Pakistan was better. So the ground where Bangabandhu called for independence is not their choice. For these two reasons they don't want to go there,’ he said.

Dr. Hashan said, the entire Chattogram is dressed up on the occasion of the public meeting of the Prime Minister Bangabandhu's daughter Sheikh Hasina.

`A great enthusiasm has been created among the people. It will be the biggest gathering ever and millions of people will gather Inshallah.

Because of the enthusiasm that has already been generated among the mass people in the region, we are sure that this will be one of the biggest public meetings in history’ he said.

Earlier, in the speech of the chief guest at the Government Mohsin College Alumni Association, Dr Hasan said that the activities of a college, university and school are not limited to teaching only.

Colleges, universities and schools are places to learn many things, he added.
`I would never have been able to stand where I am today if I had not been around the great teachers of the school. Similarly, I remember some teachers of the college, especially Sumangal Mutsuddi sir. Because I used to study privately with him. There were many other teachers, whose presence played a major role in shaping our lives,’.
Dr Hasan, a former student of Govt. Mohsin College, reminisced and said Mohsin College is one of the best colleges in Chattogram.