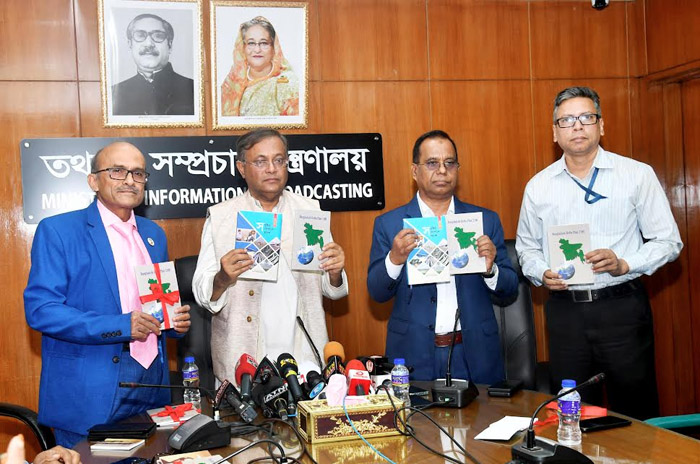 DHAKA, Nov 30, 2022 (BSS) - Information and Broadcasting Minister Dr Hasan Mahmud today said the government could not give permission to anyone for creating chaos and an unstable situation through gathering arsonists in Dhaka city from all over the country.

"The Suhrawardy Udyan has been allocated with the aim of assisting BNP in holding their rally peacefully. And the government could not give permission to anyone for creating anarchies," he told reporters while replying to a query at the meeting room of his ministry at Secretariat here.

Earlier, the minister unwrapped the covers of the English version of 'Bangladesh Delta Plan 2100' published by Department of Film and Publication (DFP) and Samriddhir Sopane Swadesh' published by Press Information Department (PID).

Hasan said the conference of Chhatra League has been rescheduled and it will be held on December 6 instead of December 8 so that BNP can hold their rally without any hassle. But their intention is to create anarchies, he added.

He said the government has to take steps in the interest of providing security to public life and to maintain peace in the country. The government would show its strict stance if BNP tries to hold their rally in Naya Paltan rejecting the allocated place, said Hasan, also Awami League joint general secretary.

He said the AL leaders and activists have been requested to maintain vigilance so that none could carry out anarchies. For this, they will be alert in every ward and resist trouble makers along with police and people if needed, he added.

He said Bangladesh left behind India in per capita income during the COVID-19 pandemic and it is now about 3000 US dollars. The Padma Bridge has been completed while the construction works of Bangabandhu Tunnel under the Karnafuli River is also nearing completion, he added.

He said Bangladesh is moving ahead indomitably under the dynamic leadership of Prime Minister Sheikh Hasina and the country is on the stage of prosperity, in reality, Hasan added.

Humayun said the whole world is passing through a crisis due to the war and pandemic. Production is the main solution to survive in this situation, he added.