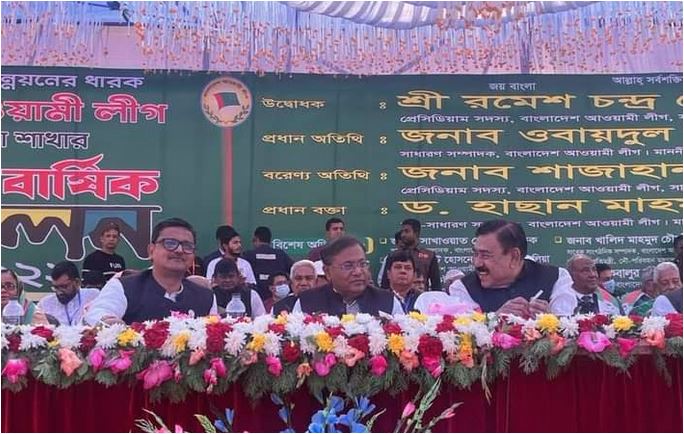 DINAJPUR, Nov 28, 2022 (BSS)- Information and Broadcasting Minister Dr Hasan Mahmud today said BNP is migratory bird as the party comes during the time of votes and goes away after becoming fat.

“BNP was not beside the countrymen during the COVID-19 pandemic or any other calamity. But, now they are appearing again. Migratory birds come to the country from Siberia and other places to have paddy in the winter season and go away after becoming fat,” he said.

The minister added that BNP is also like the migratory birds. They come during the votes and go away, he added.

Hasan said these while addressing the triennial conference of Awami League Dinajpur district unit as the key-speaker on Gor-a-Shaheed ground of the town.

AL Presidium Member Shahjahan Khan, MP, was present at the conference as the guest of distinguished with AL district unit president Advocate Md Mostafizur Rahman, MP, in the chair.

Hasan urged the leaders and activists of the party to be united.

He said Tarique Rahman is the symbol of corruption, lootings, Hawa Bhaban and Khoab Bhaban.  BNP-Jamaat and their alliance would make the country Pakistan, if they get chance again, he added.

“We cannot take the country there and we cannot hand over it to them,” said Hasan, also Awami League joint general secretary.

About BNP’s ongoing rallies, the minister said currently the party is warming the field in the winter season and holding picnics in the name of rally. They went in Sylhet, Cumilla and other places before two to three days ago of their scheduled rally and held picnic, he added.

He said, “Our leader Obaidul Quader has said that ‘there will be a game’. BNP is now ‘Puti fish’ in the field of politics.”

Later, Advocate Mostafizur Rahman, MP, and Altafuzzaman Mita have been elected as president and general secretary respectively of the AL district unit.