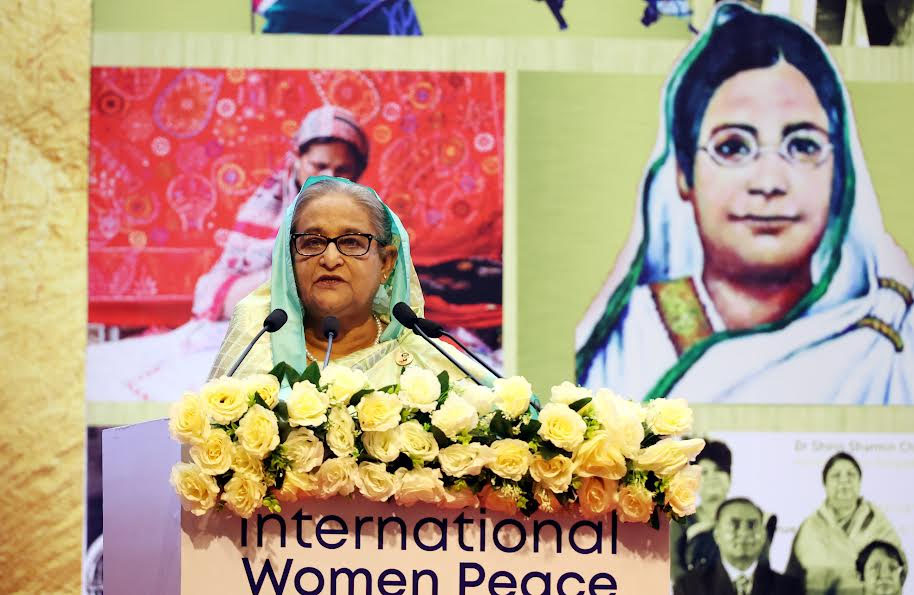 DHAKA, Nov 28, 2022 (BSS) - Prime Minister Sheikh Hasina today said women's position in the society would not be elevated without their empowerment, adding their plights multiply during any conflict and disaster.

"It's beyond question that women are the most vulnerable section of society, especially in third world countries. They suffer violence in various forms, malnutrition, illiteracy and other basic needs. Their plights multiply during any conflict and disaster," she said.

The premier said this at the inaugural ceremony of the two-day International Women Peace and Security-WPS Seminar-2022, jointly organized by the Armed Forces Division, Ministry of Foreign Affairs and Bangladesh Police at Army Multipurpose Complex, Dhaka Cantonment.

To address the peace and security issues of women, the United Nations Security Council adopted resolution number 1,325 which established the Women Peace and Security-WPS agenda, she said, adding that Bangladesh is proud to be a part in formulating the resolution.

Sheikh Hasina said that since its independence, Bangladesh has been working on promoting women in all spheres of national life.

She said the Constitution of Bangladesh framed under the guidance of Father of the Nation Bangabandhu Sheikh Mujibur Rahman guarantees equal rights to women.

Article 28 (1) of the Constitution says: The State shall not discriminate against any citizen on grounds only of religion, race, caste, sex or place of birth, while clause (2) of the same Article stipulates: Women shall have equal rights with men in all spheres of the State and of public life.

The prime minister said that her government has enacted Women Policy-2011 and the policy has taken measures to ensure women's overall development and active participation in the mainstream socio-economic activities and remove all the impediments to their empowerment.

She added that their enhanced participation and contribution to the sectors like politics, administration, education, businesses, sports, armed forces etc have been transforming the socio-economic landscape of Bangladesh.

Sheikh Hasina mentioned that gender parity in Bangladesh's all sectors has improved due to greater participation of women in socio-economic and political activities.

To this end, she said that Bangladesh is at the top position in gender equality among South Asian countries.

She continued that Bangladesh is a role model for women's participation in peacekeeping, peace-building, disaster management, and preventing violent extremism.

She went on saying that her Awami League government has opened the door for women to be recruited in armed forces during her first tenure as prime minister in 1996.

On the other hand, a total of 1,624 female police officers from Bangladesh Police have taken part in peacekeeping operations and 150 officers are currently working, she added.

The head of government also said that women in Bangladesh are now serving as government secretaries, judges of the Supreme Court, VCs of Universities and top positions of many organizations.

Sheikh Hasina said she is glad to know that the participants will interact with the Rohingyas, forcibly displaced Myanmar nationals from Rakhine state.

"We've given them shelter on humanitarian grounds," she said, adding that "We could understand their plights and miseries as we had to undergo similar experiences and shocks during our War of Liberation in 1971."

She expected that the interactive session would be a great experience for the participants to understand the victims of war and conflict.

The prime minister said that as the current chair of the Women, Peace and Security Chiefs of Defence Network that was launched by Bangladesh, Canada and the United Kingdom in November 2017, all are pledged bound to carry forward the WPS agenda.

At the outset of the function, a video documentary on women, peace and security was screened.