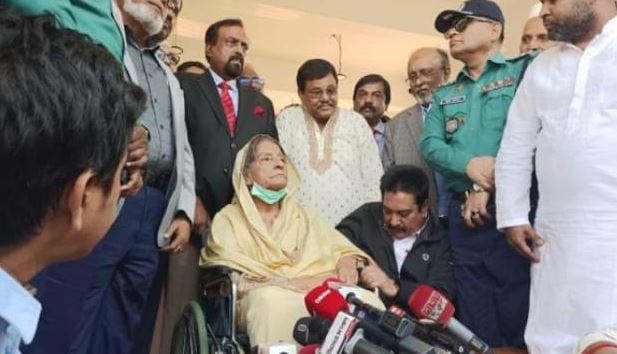 DHAKA, Nov 27, 2022 (BSS) - Chief Patron of Jatiya Party (JaPa) and Leader of the Opposition in Parliament Raushon Ershad today said that there is no question of making alliance with "tyrant political party" BNP.

"The people want a change for development and peace. Of course, BNP doesn't want that. It (BNP) is an oppressive party, so there is no question of forming coalition with BNP," she said.

The JaPa chief patron said this while talking to journalists on arrival at Hazrat Shahjalal International Airport in the city following her treatment at a hospital in Thailand.

She had been undergoing treatment at Bumrungrad International Hospital in Thailand for five months.

Speaking about the recent political propaganda that JaPa is going to make an alliance with BNP, Raushon said there might be some conspiracies for this misunderstandings and for weakening the party, which we witnessed in 1996, 2001 and 2014".

"We will thwart those conspiracies and build a united and strong JaPa," she added.
Regarding Rangpur City Corporation poll, the JaPa chief patron said, "You should remember that Rangpur is the heart of JaPa. It is the ancestral home of late President Hussain Mohammad Ershad. So, we should keep the constituency at any cost".