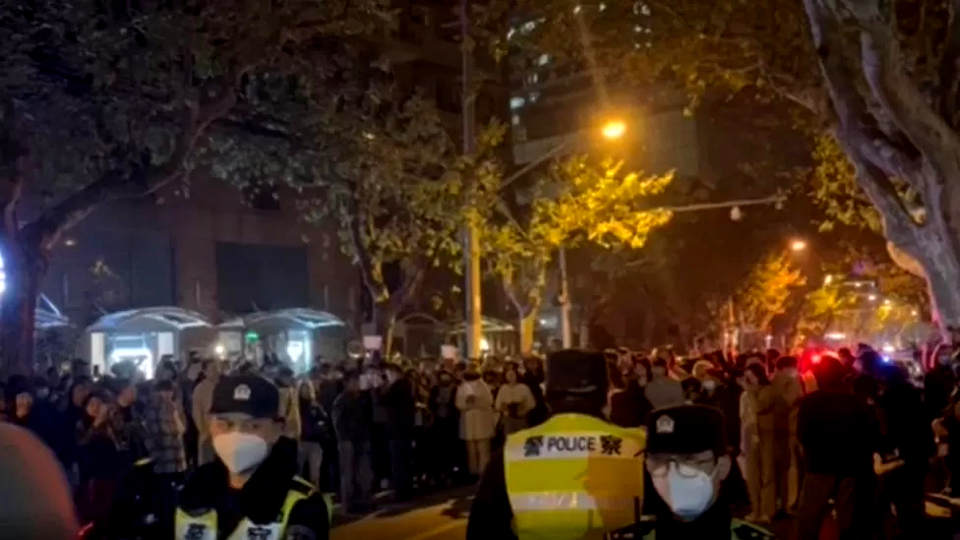 SHANGHAI, Nov 27, 2022 (BSS/AFP) - Angry crowds took to the streets of Shanghai early Sunday calling for an end to lockdowns, as China grapples with mounting public protests against its zero-Covid policy.

A deadly fire on Thursday in Urumqi, the capital of northwest China's Xinjiang region, spurred an outpouring of anger as many social media users blamed lengthy Covid lockdowns in the city for hampering rescue efforts.

In Shanghai's central Wulumuqi street, named for Urumqi in Mandarin, in a video widely shared on social media and geolocated by AFP, some protesters can be heard chanting "Xi Jinping, step down! CCP, step down!" in a rare display of public opposition to the country's top leadership.

Video taken by an eyewitness on Sunday showed people gathering in central Shanghai to mourn the 10 victims killed in the Urumqi fire.

Other vigils took place at universities across the country, according to posts widely circulating on social media.

"There were minor clashes but in all, civilised law enforcement," they added.

"At last a couple of people were taken away by the police for unknown reasons."

Authorities were swift to curb online discussion of the protest, with phrases related to the visit scrubbed from the Twitter-like Weibo platform almost immediately after footage of the rallies emerged.

The protests come against a backdrop of mounting public frustration over the Chinese government's zero-tolerance approach to Covid and follow sporadic rallies in other cities.

China is the last major economy wedded to a zero-Covid strategy, with authorities wielding snap lockdowns, lengthy quarantines and mass testing to snuff out new outbreaks as they emerge.

A number of high-profile cases in which emergency services have been allegedly slowed down by Covid lockdowns, leading to deaths, have catalysed public opposition to the measures.

"I'm also the one throwing myself off the roof, trapped in an overturned (quarantine) bus, breaking out of isolation at the Foxconn factory," read one recent viral comment referencing several recent incidents blamed on zero-Covid strictures.

In another clip, dozens of people are seen marching through a neighbourhood in the east of the city, shouting the same slogan before facing off with a line of hazmat-clad officials and angrily rebuking security personnel.

AFP was able to verify the videos by geolocating local landmarks, but were unable to specify when exactly the protests occurred.

In the wake of the protests, officials on Saturday said the city "had basically reduced social transmissions to zero" and would "restore the normal order of life for residents in low-risk areas in a staged and orderly manner".

China reported 39,506 domestic Covid cases Sunday -- a record high but comparatively small compared to caseloads in the West at the height of the pandemic.