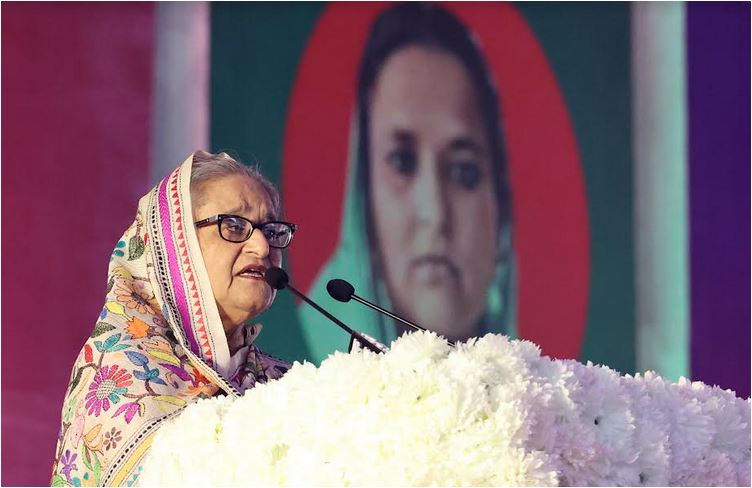 DHAKA, Nov 26, 2022 (BSS) - Prime Minister and Awami League (AL) President Sheikh Hasina today hinted that no dialogue would be held prior to the next general election, saying any party can take part in the polls, if it wants.

The Prime Minister said this while addressing the opening session of the sixth triennial council of the Bangladesh Mohila Awami League (BMAL), the women's wing of the ruling Awami League, at the historic Suhrawardi Udyan, here in the capital city this afternoon.

"Many people say dialogue should be held. With whom the dialogue will be held, is it with the BNP, the convicted accused  Khaleda Zia and Tarique Rahman  who wanted to kill me by grenade attacks?" she said.

The Prime Minister questioned whether they would have to hold dialogue with the corrupts, embezzlers of orphan's money, money launderers, arms traffickers, grenade attackers, killers of Ivy Rahman.

She added that Ziaur Rahman, husband of Khaleda Zia, was the killer of her father Bangabandhu Sheikh Mujibur Rahman.

"They are talking about human rights (but pursuing for holding dialogue with BNP to take them in the election). I want to ask them what kind of demand it is," she said.

The Prime Minister asserted that the people of the country will hold an election even if any party boycotts it and they would not accept vote rigging.

Referring to the February 15, 1996 election held by Khaleda Zia, she said the people of the country did not accept the election and toppled them from power in one and a half months of the election.

"Khaleda Zia had to step down (from the power) on charge of vote rigging," she said.

Sheikh Hasin said the people waged movement against the vote rigging and the goons of the BNP-Jamaat and police personnel unleashed inhuman tortures on the masses, particularly the women.

"Pregnant women and mothers were not spared from the torture," she added.

But, the BNP women are now waging movement by bringing out processions and holding rallies without any interventions from the government, she said, adding that they did not forget the torture inflicted on them.

The Prime Minister said BNP's movement is to kill innocent people through arson attacks, referring to arson attacks of the BNP and its clique in 2013-14 in the name of movements.

"We have no objection, if you want to do movement and struggle, bring out processions, hold meetings. But, not a single person would be spared if they want to kill anyone with arson, grenade or bomb attacks," she warned.

Mentioning that they never forget inhuman torture on the Awami League men by the BNP-Jamaat clique and said, "We tolerated your torture, but don't consider tolerance as our weakness. It is not our weakness."

The Prime Minister reminded the BNP men that the people of Bangladesh are in favour of the Awami league.

"The people are with the Awami League not with the killers. Ziaur Rahman, Khaleda Zia and Tarique Rahman are the killers. On what rights, they will appear before the masses and want votes and do politics," she added.

Khaleda Zia and Tarique Rahman have been awarded punishment for their offences with jail terms, she said.

"So, can they do for the welfare of the countrymen? But, when the Awami League assumed power, they worked for the people's welfare," she said.

The Prime Minister asked the Mohila AL leaders and activists to work for the wellbeing of the country and its people.

Briefly describing various measures for overall development of the women folk, Sheikh Hasina said her government has been doing everything possible for the women as she believes no development can take place by keeping women, half of the total population, in the dark.

The Prime Minister said her government has first taken measures appointing women in the armed forces, BGB, police and in the High Court alongside posting women in the top posts of administration and police that included the post of secretary, deputy commissioners, officer-in-charge (OC) and superintendent of police.

She said there are 23 women in the parliament who are elected directly by people's vote alongside 50 others from the reserved seat.

The Prime Minister said her government has been giving allowances to widows, elderly women, lactating mothers and pregnant women to ensure their better living.
Marking the council, the entire Dhaka city wore a festive look as thousands of the Mohila Awami League leaders and activists including councilors and delegates thronged at the historic Suhrawardi Udyan and its surrounding areas in processions with colourful festoons, placards and posters since early morning from across the country.

The premier formally opened the council by hoisting the national flag and releasing balloons and pigeons, the symbol of peace.

At the outset of the programme, a documentary on the Bangladesh Mohila Awami League was screened followed by a colourful cultural programme.