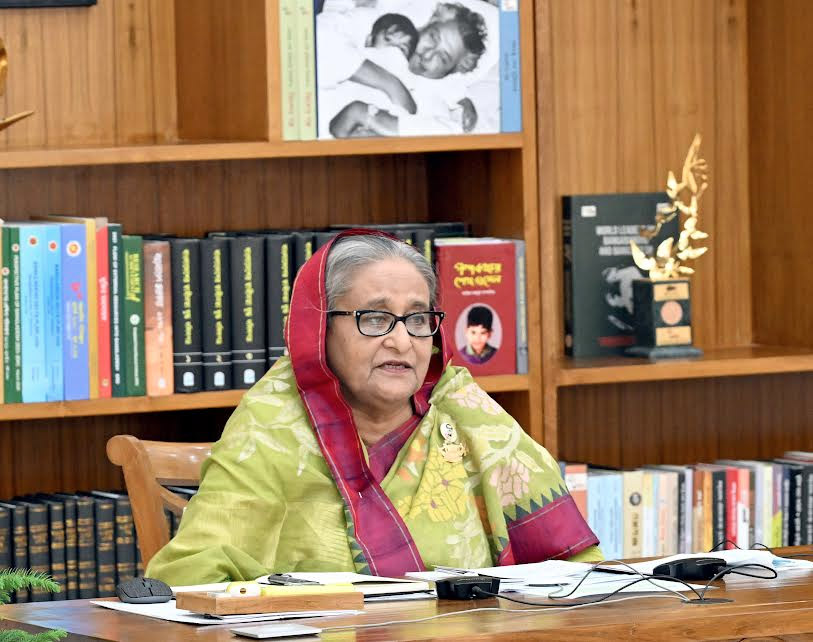 DHAKA, Nov 26, 2022 (BSS) - Prime Minister Sheikh Hasina today urged the countrymen to contribute to the development of their own areas as the government is working for the overall progress of the country.

The premier said this while addressing the celebration ceremony of the civil works completion of the south tube of Bangabandhu Sheikh Mujibur Rahman Tunnel under Karnaphuli river in Chattogram.

She joined the function virtually from her official residence Ganabhaban here.

Referring to the ongoing development works under the Awami League (AL) government, she said, "Bangladesh is moving ahead . . . None can stop this stride towards progress anyhow."

Sheikh Hasina, however, suggested the people, who don't see the development works of the government, to go to the eye specialists.

"Our development work is not visible to many people. May be their eye sights are lost. If it is so, they can go to the ophthalmologists. We've established a very good eye institute. After getting treatment from there, they might see the development," she said.

If someone is blind even after having eyes, "then we have nothing to do," the prime minister added.

Sheikh Hasina also said, "Yes, sitting in power, they can devour, smuggle money, smuggle 10 trucks arms and siphon off money. They didn't work for the people's welfare, and even can't do in the future, this is the reality."

At the ceremony, a video documentary on the Bangabandhu Sheikh Mujibur Rahman Tunnel was screened.

"Awami League always thinks in line with the modern era, advances the nation and develops the country with indomitable pace," she said.

She also said it is only AL which thinks modern resulting in having a tunnel beneath the River Karnaphuli in the country.

She said that Zia, Ershad and Khaleda Zia never think about the construction of tunnel under a river. "Actually they have shortage of thinking," she added.

Sheikh Hasina said construction of the tunnel will brighten the image of the country and expedite its economic activities. "This will contribute a lot to the country's economy," she said.

She said the construction of Bangabandhu Sheikh Mujibur Rahman Tunnel under Karnaphuli river is the first such tunnel in South Asia and is an astonishing infrastructure as well.

"Bangladesh is now a changed country and none would be able to stop its ongoing progress and advancement," she added.

The premier said that after inauguration of the tunnel next month, road communication with Cox's Bazar from Dhaka and Chattogram would be very easy and faster.

Besides, country's economy will get momentum and tourism, economic activities and trade and commerce in the entire Chattogram region will be further expanded and strengthened, she added.

The tunnel is being constructed to develop Chattogram city like Shanghai of China as one city two towns, she said.

She continued that the new town at Anwara end of the tunnel will be developed in a planned manner to this end, while step has also been taken to connect Cox's Bazar with Dhaka and Chattogram through rail link.

Referring to development of Chattogram region, Sheikh Hasina said Chattogram is very important commercial city of Bangladesh and her government is implementing massive programmes for its development.

In this regard, she mentioned that steps were taken to develop the port city with new structures and it will help foster the economy of the country a lot.

Actually the people who were in the power during this period, they didn't believe in the spirit of the War of Liberation and that is why they didn't develop this country, she said.

"Why didn't they want to change the fate of the countrymen as power was the only issue of enjoyment to them and that is why the country didn't move forward," she said.

Awami League has done possible everything to pull the country ahead following the footsteps of Father of the Nation Bangabandhu Sheikh Mujibur Rahman, she added.

Briefly describing the development works taken by her government, the prime minister said they have significantly reduced poverty in the country and now people don't do howl for food.

Referring to the Covid-19 pandemic and Ukraine war, she said the world is suffering from it and even many countries have declared recession although Bangladesh is still moving ahead with its ability.

To this end, she reiterated her call to the people to boost food production and produce whatever they can using every inch of land. "We will go ahead by producing our own food without begging to anyone," she continued.

She again suggested all for exercising austerity in using electricity, water and fuel as Corornavirus outbreak, Ukraine war and sanction have skyrocketed the prices of every items in international markets and inflation is a huge problem.

"We are not beyond the adverse impact of this rather we are already suffering from it. But, we are still able to keep the wheel of our economy rolling," she noted.

The prime minister also reiterated her call to the countrymen to be cautious, aware and frugal. "If we do so, we can move forward," she added.