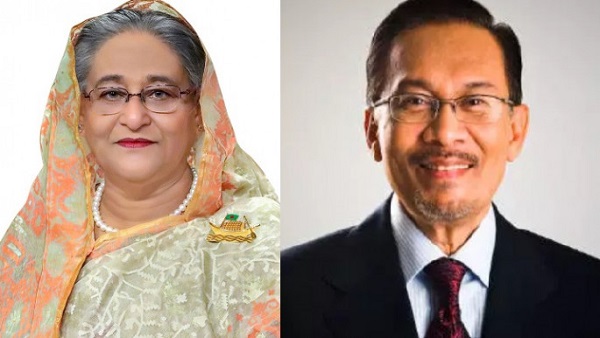 In a letter wrote to her new Malaysian counterpart, she said, "On behalf of the Government and the People of Bangladesh and my own behalf, I extend the heartiest congratulations to you on your assumption of office as the Prime Minister of Malaysia."

"Your election to this high office is a clear testimony and a manifestation of trust and confidence by the Malaysian people in your visionary leadership, wisdom, and long-time sacrifices for your country," she said, according to a press release of the Prime Minister's Press Wing issued today.

She continued, "I am confident that under your charismatic stewardship, Malaysia will continue to thrive with greater prosperity in the days ahead."

Sheikh Hasina mentioned that the year 2022 is a special year for Bangladesh-Malaysia friendship as both countries are celebrating the 50th anniversary of establishing diplomatic relations.

She gratefully recalled that Malaysia was one of the first Muslim-majority countries to recognize Bangladesh in early 1972.

Since then, the two countries have been enjoying an excellent bilateral relationship based on common faith, fraternity, and cooperation for the shared prosperity of the two peoples.

The Premier noted with deep satisfaction that Malaysia hosts a substantial number of Bangladeshi nationals working in various sectors of the economy and contributing to the socio-economic development of two countries.

She reiterated that both countries are committed to further consolidating the comprehensive partnership in various areas such as human resources, trade, investment, education and tourism.

Sheikh Hasina kept trust that the existing multi-dimensional relationship will grow forth from strength to strength under dynamic leadership of Anwar bin Ibrahim.

She is looking forward to working closely with the new Malaysian Prime Minister on mutual interests in the bilateral, regional, and global context to benefit the two nations.

The Prime Minister wished Anwar bin Ibrahim a good health, long life, and happiness and peace, progress and prosperity for the brotherly people of Malaysia.