PM’s Japan tour is to be rescheduled: Alam 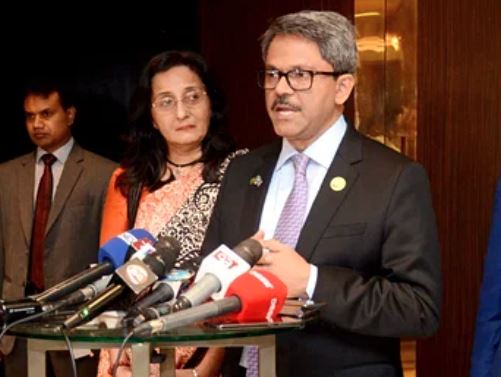 "The visit will take place soon,” he told a newsmen following a meeting with Japanese state minister for foreign affairs Takei Shunsuke at InterContinental Hotel here.

Alam said though no date was formally announced so far about her planned trip, an unofficial schedule was circulated in the media but the planned tour would not take place according to that schedule.

"You heard about a date but the visit is not taking place on that date, considering the current circumstances (in Japan)," he said adding the diplomacy may require such changes even at the last moment, hinting about a political situation in Tokyo.

In a different interaction with reporters foreign minister Dr AK Abdul Momen later said Japan was currently witnessing an internal political problem and “we are observing the situation”.

He said the COVID-19 situation in Japan was another issue which would restrict the Bangladesh delegations movement while the prime minister’s entourage included a large number of business entrepreneurs.

"Bangladesh-Japan relations are very deep. It will further be deepened through the visit," he told newsmen on Wednesday.

Alam said there are some agreements and MoUs which would be signed during the prime minister-level talks.

The foreign ministry earlier said the Bangladesh premier was likely to go to Tokyo on November 29.

The decision to postpone the Bangladesh premier’s Tokyo visit came as the Japanse and international media reported that three Japanese ministers quit the cabinet in the past one month with internal affairs minister Minoru Terada being the last one who stepped down on Sunday.

“Speculation persists that Prime Minister Fumio Kishida will call a snap election for the House of Representatives in January to reverse his fortunes after a string of resignations by members of his Cabinet,” the japan Time reported today.