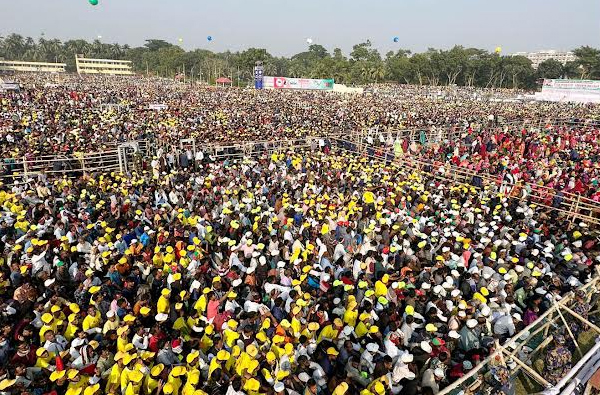 JASHORE, Nov 24, 2022 (BSS) - The entire Jashore today turned into a place of euphoria with enthusiasm of hundreds of thousands of people as Prime Minister and Awami League (AL) President Sheikh Hasina addressed a grand rally here.

District AL organised the huge mass gatherings at the Jashore Stadium where Sheikh Hasina delivered her address after five years to begin her party's electoral campaign for the 12th parliamentary election likely to be held in 2024.

It was Sheikh Hasina's first appearance at the public gatherings outside Dhaka after over 27 months since the Covid-19 outbreak.

Pinning upon the public rally of the prime minister, the entire Jashore turned into a town of jubilation.

On the arrival of the prime minister, hundreds of thousands of people throng the rally ground at district stadium from early morning and within few hours, the ground became full to the brim.

The crowd then spilled over the surrounding areas, roads and empty places, meaning the town turned into human sea before arrival of Prime Minister Sheikh Hasina on the stage at 2:38 PM which was made in the shape of a boat.

Women in large and small groups as well as individually waited in the queue at the gate with smiling faces to enter the venue.

Hundreds of thousands of leaders and followers of Awami League and its associates bodies from different districts of Khulna division and adjoining areas of Jashore joined the rally with a fleet of reserve buses, pickups, motorcycles while many were seen joining the rally on foot.

A group of people, who came from Manirumpur Upazila, said they arrived at the venue early to secure their place in the front row. Due to a huge crowd, they feared that they might not be able to enter the venue if they were late, they added.

Colourful arches and gates have been constructed on various roads of the town with the posters and banners of the prime minister. AL leaders set up banners, balloons, festoons and posters welcoming the prime minister and the party chief in various areas including Daratana More, Bangabandhu Sheikh Mujibur Rahman and Garibshah Roads and other areas.

His elder daughter Sheikh Hasina delivered her address at the public meeting on the same field after 50 years.