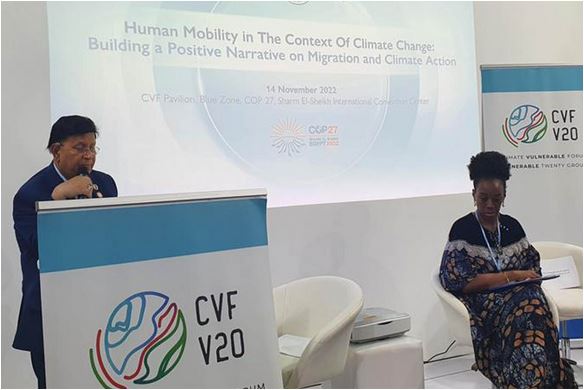 He stressed this point while delivering his welcome remarks at an event titled 'Human Mobility in the Context of Climate Change: Building a Positive Narrative on Migration and Climate Action' held on the sidelines of COP 27 in Sharm El-Sheikh in Egypt on Monday, a press release said here today.

Among others, Special Envoy of Ghana Presidency of CVF Henry Kwabena Kokofu, IOM's Deputy Director General for Operations Ugochi Daniels, and Permanent Secretary for Water and Environment of the Republic of Uganda Alfred Okot Okidi also spoke at the event.

Earlier in the day, Foreign Minister Momen was present at the launching event of the Global Shield against Climate Risks, an initiative led by the Vulnerable 20 Group of Finance Ministers (V20) and the Group of Seven (G7) for financial support designed to be quickly deployed in times of climate disasters.

Speaking at the event, Foreign Minister called on the G7 to mobilize new and additional resources towards the Global Shield, going beyond the financing commitments made under the Paris Agreement.

"We must work on fostering multi-stakeholder partnerships with open, transparent and collaborative approaches to tackling complex climate challenges affecting our deltas and coastal areas," Dr Momen said.
He also reiterated Bangladesh's commitment to work together with the Netherlands and other deltaic countries within the framework of the International Delta Coalition.

Momen also thanked the Dutch government for the technical assistance for developing the Bangladesh Delta Plan 2100.

The event was attended by ministers for the Netherlands and Egypt, among others.