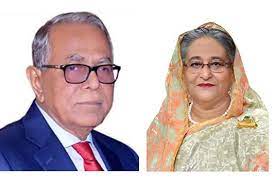 DHAKA, Sept 30, 2022 (BSS) - The International Day of Older Persons will be observed in the country tomorrow like elsewhere across the globe with the theme 'The Resilience of Older Persons in a Changing World'.

On the eve of the day, President Abdul Hamid and Prime Minister Sheikh Hasina issued separate messages greeting the country's all senior citizens and wished sound health and peaceful life for them.

President Abdul Hamid, in his message, said, "I welcome the initiative of observing the International Day of Older Persons in the country like elsewhere in the world. I think this year's theme for the day 'The Resilience of Older Persons in a Changing World' is appropriate".

Father of the Nation Bangabandhu Sheikh Mujibur Rahman had inserted Article 15 (Gha) in the Constitution of Bangladesh for ensuring social security of the country's senior citizens, he said.

To ensure a dignified, poverty-free, functional, healthy and secure family and social life for the elderly persons, the government has enacted the National Policy on Older Persons-2013 and the Parent's Care Act, 2013, the head of the state added.

Besides, old-age allowance was introduced in the fiscal year 1997-98 during the first tenure of the present government, Hamid said, adding that so far, cent percent elderly people of 262 upazilas of the country have been included in this allowance facility.

In the financial year 2022-23, a total of 57 lakh 1 thousand senior citizens are receiving old-age allowance, he said.

Apart from this, the work of setting up eight old homes for the elderly people who do not have relatives and shelter is going on, he continued.

"I strongly believe that these steps taken by the government will play a useful role in the welfare of the elderly people," he hoped.

Prime Minister Sheikh Hasina, in her message, said the Awami League (AL) government has taken various initiatives, including National Policy-2013 on Older Persons and the Parent's Care Act, 2013, for overall welfare of the elderly people.

She said proper initiatives have been taken to implement the national elderly policy and build the elderly development foundation to increase the civic benefits of the elderly people.

"By using the knowledge and experience of seniors for the development of the country, we want to build the 'Sonar Bangladesh' as dreamt by the father of the nation Bangabandhu Sheikh Mujibur Rahman. Our government is continuously working towards this goal," Sheikh Hasina said.

It will be possible to reach the desired goal if various development organizations and private organizations come forward for the welfare of the elderly people along with the government, she said.

The spread of coronavirus has increased the health risk of the elderly people at a serious rate, the premier said, adding:"Our senior citizens have shown immense resilience in facing this global pandemic."

She urged all to work together to keep senior citizens of the country safe.

The President and the Prime Minister wished all-out success of all programmes of the day.

According to the recently published 'World Social Protection Report 2021-22' by the ILO, Bangladesh secured second position in South Asia as Bangladesh covered 28.4 percent of people in social protection programs where the elderly population was also included, she continued.

The International Day of Older Persons has been observed across the world since 1991 aiming to creating public awareness about old age along with ensuring security and rights for the senior citizens.

On December, 14 in 1990, the United Nations General Assembly designated October 1 as the International Day of Older Persons (resolution 45/106).

This was preceded by initiatives such as the Vienna International Plan of Action on Ageing, which was adopted by the 1982 World Assembly on Ageing and endorsed later that year by the UN General Assembly.