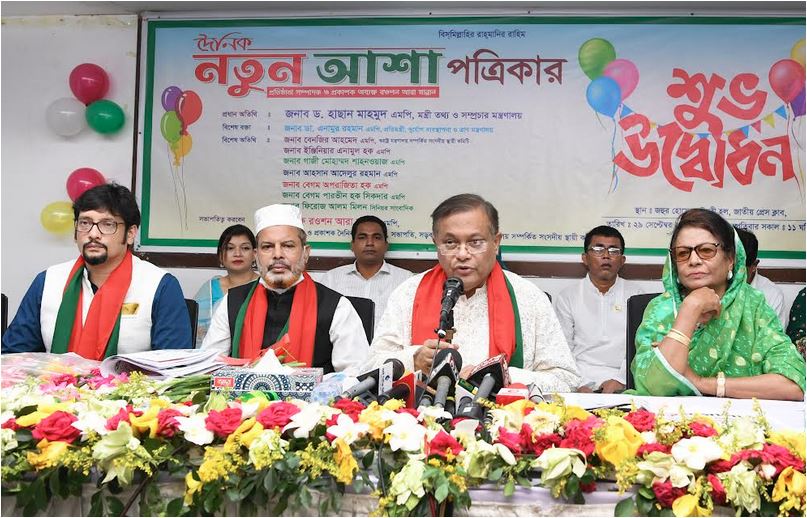 DHAKA, Sept 29, 2022 (BSS) - Information and Broadcasting Minister Dr Hasan Mahmud today said it is the ethical responsibility of the mass media to present the real scenario of achievements, development and progress along with mistakes of the government.

"It is the responsibility of the mass media to present the development and progress along with the mistakes. But, in many cases it does not happen and this doesn't benefit the country and society," he said, joining the inaugural function of the daily Natun Asha at the Jatiya Press Club in the capital.

Hasan said the country left behind India, as per a report of IMF, in the per capita income in 2021 despite the COVID-19 situation while Bangladesh left behind Pakistan long ago. The report was published in their respective media and they praised the leadership of Prime Minister Sheikh Hasina, he added.

But, the minister said, it is regrettably true that such praises were not seen in Bangladesh though it was the responsibility of the mass media.

He said the women football team, cricket team and other sports teams have many achievements and the government has contributions to those successes. Many products are being exported while the government is providing all facilities to the exporters, he added.

The minister urged the mass media to present the real scenario of all achievements of the nation through their respective outlets.

He said negative news must be published if those have news value. But it is also needed to publish the advancement of Bangladesh, said Hasan, also Awami League joint general secretary.

The minister hoped that the new daily 'Natun Asha' will create hope among the people.

He said the government is media-friendly and Prime Minister Sheikh Hasina thinks that the base of a multi-dimensional society is strengthened through flourishing of mass media. For this, the government is doing everything in the interest of the mass media, said Hasan.

He said currently the number of daily newspaper is more than 1250 while it was only 450 in 2009. The number of private television is 46, he added.

He said not only the flourishing of the media, the welfare trust, which was formed for the journalists, is now a place of trust. Journalists and their family members are getting grants from the trust fund, he added.

He said the assistance of Journalists Welfare Trust is open for all helpless newsmen of the state irrespective of thoughts and opinions even those who criticize the government strongly.