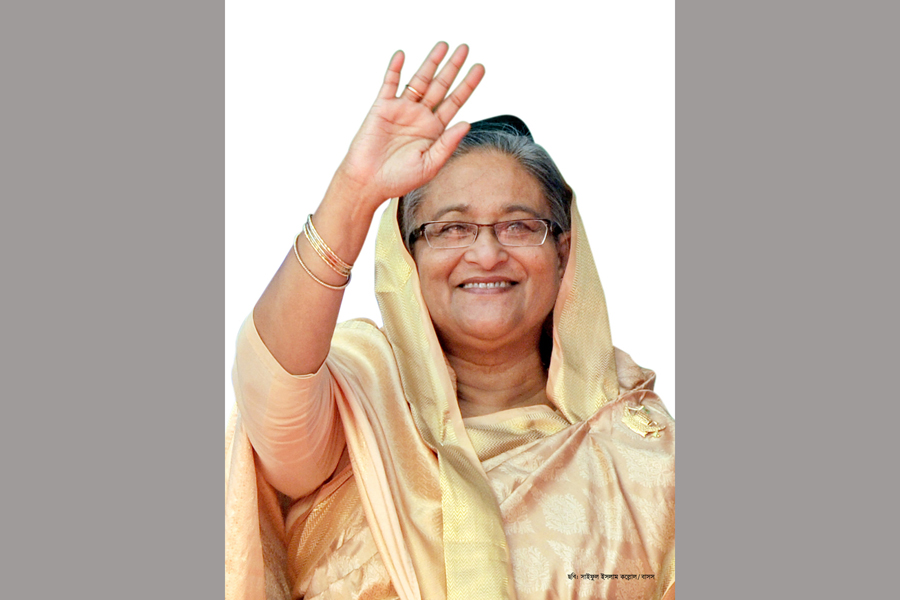 DHAKA, Sept 27, 2022 (BSS) - The story of the phoenix could be an appropriate example to describe her tale if someone intends to look into the background of Sheikh Hasina.

Phoenix, the mythological bird obtains new life by arising from ashes of its predecessor and her case appeared nearly identical as she eventually emerged as the redeemer while the nation was exposed to a protracted wilderness after the August 15, 1975 carnage.

The assassins wanted to eliminate the entire bloodline of the man who founded the independent Bangladesh spearheading a lifelong struggle to uphold the dignity and rights of his people.

But the Almighty had a different plan - a classic symbol of Bengali women, Sheikh Hasina, made her way to be the steward of the nation - perhaps to accomplish the unfinished task of the Father of the Nation.

"I'm none but your daughter, sister or mother, who can be reached whenever one wants . . . I'm not a distant one. I'm very close to you," she said once while sketching herself to an interviewer.

"See my name - Hasina. You will find this plain and simple name in thousands at numerous households across rural Bangladesh - HA SI NA -."

She made the comment few years after she made her debut in national politics in 1981 with a difficult mission of leading a renewed campaign to rebuild Bangladesh.

As the world history just witnessed a significant transition, the partition of the Indian subcontinent with the end of the 200-year British rule in 1947, she was born at a remote southwestern village, of what now is independent Bangladesh.

She was born in a middle class family which until then was no extraordinary one, other than the respect it drew for its generosity and keenness for education.

While the nature was rearing up her father as a politician, often keeping him away from the family to be the future founder of a country and Father of the Nation, Sheikh Hasina grew up like other ordinary children in the open air of her Tungipara village along the bank of the river Modhumoti.

Sheikh Hasina recalled her childhood when she used to roam around with others of contemporary age in the country roads, often looking for green jujube, a typical lifestyle of a child in traditional Bangladesh.

She loves to recall how she used to join other children in catching fish with an "ocha" which requires one to walk through the shallow waters with a small fishing net tied with two bamboo sticks.

Decades later in an interaction with a group of children she revisited her fond childhood memories and found herself in her village home as a truant child - climbing trees, swimming in the canals, catching fish, eating green mangoes from other people's trees.

"Those were the best times of my life," she said.

At that programme she told the children to learn to be happy of which they are blessed with, so a sense of greed or envy do not grasp them.

At home, being the eldest of her parents' five children, she was absolutely a family girl, with immense love for parents and younger brothers and sister.

The acquaintance with the nature and socialisation with the ordinary rural people instilled into her a sense of love for people as well as environment, the aptitude to understand the social fabrics and the traditional wisdom or indigenous knowledge.

This understanding and the love for nature and human being, coupled with the inherited family values shaped her basic character.

Despite her infallible and eternal links with the village, anyone, be her admirer or critic, will invariably call her urbane, acknowledging her natural smartness, progressive outlook, passion for culture and a unique style of herself, in terms of her appearance, attire and interactions.

This unique combination of qualities drew her love, affection and respect from people of every social stratum - ranging from a shoemaker to the Queen of England.

"Where is HA-SINA, I can't see her!" Queen Elizabeth once said in an affectionate tone at a reception at Buckingham Palace as Commonwealth heads of government were joining a reception there.

Sheikh Hasina herself recalled this sweet memory in a BBC interview last week as she visited London to join the Queen's funeral.

Several of her intimate friends recall that when she was a university student, her personal bookshelf was filled with rich literatures and biographies of great people. She herself once wrote how the family atmosphere developed in her the habit of reading newspapers to keep her updated on contemporary issues and event.

She loves the literature of Rabindranth Tagore while Poet Kazi Nazrul Islam, Jibanananda Das and Sukanta Bhattacharya also were her favourite writers. The famous Pather Pachali of Bibhutibhushan Bandopadhyay is her favourite novel.

The passion for the literature perhaps enriched her with an extra eye to understand the human nature and life - a very, very crucial quality needed for a political figure and statesman of her standard.

She has her own vision to lead Bangladesh to an extra-ordinary height and has the passion to do it with all out integrity.

People in her close periphery or those who keep an eye on her as a public figure find in her also the passion for music, movies and history.

In her personal periphery she expresses her own rating about a poet, a singer or a musician and an actor as a connoisseur.

Acquaintances say one can engage with her in debates on wide range of issues like movies, TV serials, trend of literature, and price of essentials alongside politics.

An inborn leadership quality, tremendous vigour, extraordinary sense of humour, compassionate mind and dignity installed her at the centre stage of every arena she was and is in.

"I have been associated with the political ups and downs of the country and with the Awami League since my childhood," she once wrote in an article.

Sheikh Hasina witnessed the unbearable oppression suffered by her father and his colleagues during the democratic movements when she also observed her mother Begum Fazilatunnesa Mujib guiding the family and obscurely the party as well.

"My first lesson in politics came out of my family atmosphere," she wrote.

But hers was not the case of a fortunate princess who appeared in a set stage as the heir to the throne.

It was actually an experience of a girl who grew up seeing her father waging campaign for the cause of the common people, sacrificing his own personal comforts and benefits.

She witnessed that her father's struggle often exposed him as well as the family to intense miseries and despite all commitments, affection and concerns for the family as a son, husband and father, his mission often debarred him from leading the life of an ordinary family man.

She learnt how her father earned the love and respect of the downtrodden people offering his services even for individuals in distress.

As she gradually grew up, Sheikh Hasina saw how her father spearheaded the mass campaign to attain the just causes of the ordinary people, whom he considered as "my men".

She watched him closely as he forged for them a distinct cultural and political identity; visualised and articulated for them the dream of independence and eventually led them in a successful struggle to create a nation.

"As I turned over the pages of the notebooks and caressed his handwritten lines it seemed to me my father was telling me, `Don't be afraid, dear; I am with you; go ahead, and be resolute.' It seemed to me that God had miraculously sent a message to me to be indomitable," she wrote in a piece.

She is now a living book of politics in Southeast Asia and a role model for emerging leaders elsewhere.